Welcome to my stop on the blog tour for Shadowsong by S. Jae-Jones! There are so many fun things ahead of your in this post (fashionable outfits, reviews, giveaways!), so just stick around and revel in all the glory. If you haven’t heard of this series, it’s a spell-binding, luscious fantasy about Liesel and her journey underground to live with the Goblin King in exchange for her sister Käthe’s life.

Wintersong was so amazing and definitely deserved the whole 5 stars I gave it! You can read my review here. The following review will contain spoilers for book one, so I recommend you skip past the review to the fashion & giveaway portion of this post which everyone can enjoy! (Just look for the next big heading.)

But, if you’re willing to either brave the spoilers or have read Wintersong already, then proceed for my thoughts on the conclusion to this story.

It’s six months after Liesel returned to the world above and Liesel is trying to help her family’s inn and keep them afloat while furthering her & her brother’s musical careers.

Her brother has become cold and distant and Liesel has lost the music the Goblin King inspired in her–and she cannot forget the memory of that young, austere man whose name she does not hold.

And troubling signs of the barrier between worlds weakening are present across Europe, and Liesel must return to the Underground and unravel the mystery once again, as well as solve it once and for all.

This was a good book, but I didn’t enjoy it as much as I did Wintersong.

The first book had me captured–it took me in its spell and I wasn’t spit out until later that night when I just had to finish it before going to bed. It was magical and spell-binding and romantic and stirred all sorts of emotions inside me.

Shadowsong is very unlike Wintersong. It threw me very much off guard as I didn’t expect this–I was thinking there was going to be tons of Der Erlkönig angst and magic and romance and everything I loved in the first book.

But this is a very different book. It’s darker and heavier and I feel like a lot of the reason why I enjoyed it less was because I was just so thrown off. I ended up taking a lot longer to read it, and it went much deeper into the characters and their struggles. No more could I just revel in the magic of the Underground, but I, as well as Jae-Jones, had to confront my own demons and the demons of the characters.

On a technical level, this book is equally fantastic. It’s written well and has all the attributes of great writing. Jae-Jones’ style is a little more flowery than usually, but nothing that made me sigh with discontentment.

If you were expecting Der Erlkönig to have substantial page time, you will be sorely disappointed. Please prepare yourself accordingly (I, myself, will be searching up fanfiction to sustain all the angst still present inside me). If you were expecting magic, it’s still there to an extent, but not the same lilting sort of superficial enchantments you may have enjoyed in the first book.

It’s just different. There’s a huge focus on Liesel and Josef’s relationship which is a central part of this novel and a more minor part of the last. It dives deeper into the true souls of the characters and their own sufferings and madness.

I learned that Liesel has a form of bipolar disorder, following suit with the author, which is something I didn’t know originally and hadn’t really seen in the first book. Looking at the series as a whole, this is something I would have liked to see more present in the first novel because it kind of came out of nowhere to me in the author’s note where Jae-Jones explains some of her own experience and how she wasn’t ready to face this when writing the first novel.

It was definitely a more symbolic and less tangible representation of this and more of a “madness” that was present in the novel. I can’t comment on the representation and the #OwnVoices aspect of this which reflects Jae-Jones’ own experience, but I do think that I would have liked more foreshadowing for this part of book 2 in book 1.

We also learn a lot more about Josef (such a sweet smol bean) who’s all grown up and struggles with a ton of his own issues. We get chapters from his point of view, which is very exciting, and it’s slightly mentioned how he self-harms (TW) and his own lack of passion.

The characters embark on a journey in the aftermath, but I felt like not a lot happened despite the number of pages. They went to another country and then dawdled in a few places for what seemed like a good chunk of the novel and then all the climatic things (the traveling to the Underground mentioned in the summary) happened in the last hundred pages.

The ending felt a little short and anticlimatic in the aspect that it was very open and I was unsure of how everything wrapped up. It was much less literal than you might expect.

The entire novel is paced very well–it’s not like things are dull–but it felt like the pages weren’t contributing to the story and buildup as much as they did in the first novel. I still enjoyed what was happening, but in a different manner that was less excitement and more marvel.

Although the two novels feel pretty disconnected from each other, I would still definitely recommend lovers & readers of Wintersong to check this out. It’s different, but I think it’s worth it (and might even be better if you weren’t as much of a fan of the first novel).

Now for the part you’ve all been waiting for…

No, not the giveaway. Instead, I’ve got a little more insight on the happenings in part of the novel and some gorgeous fashion pieces for you to look at!

In the novel, Count Procházka sponsors Liesel and her family in a new city and they go and stay under his coin, not meeting him until his black-and-white soiree for the elite.

“Unlike the other parties hosted throughout Vienna’s fifth season, Count Procházka’s soiree required that we be attired only in black and white.”

In a rush to impress, Käthe does a miraculous job in sewing costumes for Liesel, herself, François, and Josef, which I’ve managed to (somewhat) put together from a hodgepodge of sources! (Mind you, these aren’t my photographs.)
So, without further ado, here’s what I imagine the four of them wore to the ball! 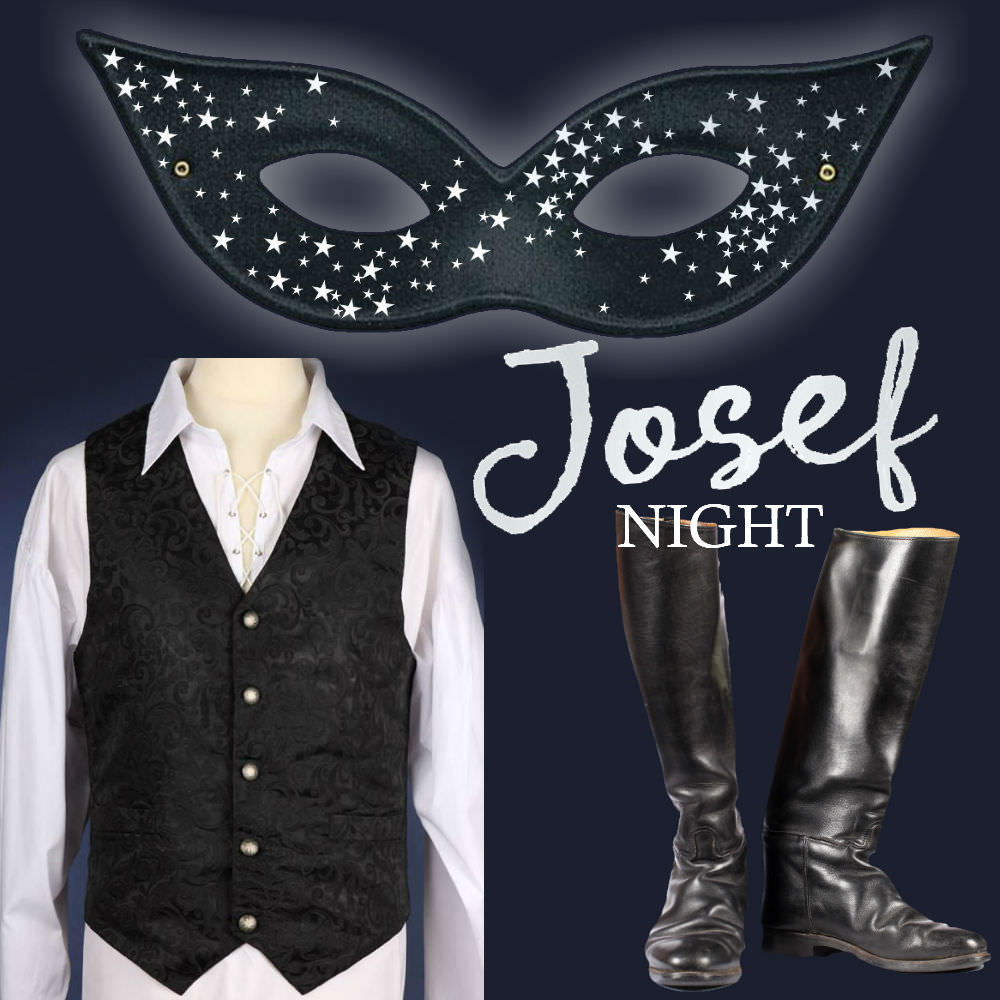 First up is Josef who was dressed in black and silver to resemble night. With a sober woolen coat, brocade waistcoats lined with silver thread, well tailored breeches, and knee high-leather boots, he looked simple yet striking in his costume, all completed with a silk domino mask patterned with stars.

I didn’t include all the aspects (how much woolen coat can one take?) but I did have the important part! Josef is very much detached in this part of the novel as he’s suffering with his own personal issues, but he will soon find more is in store for him… 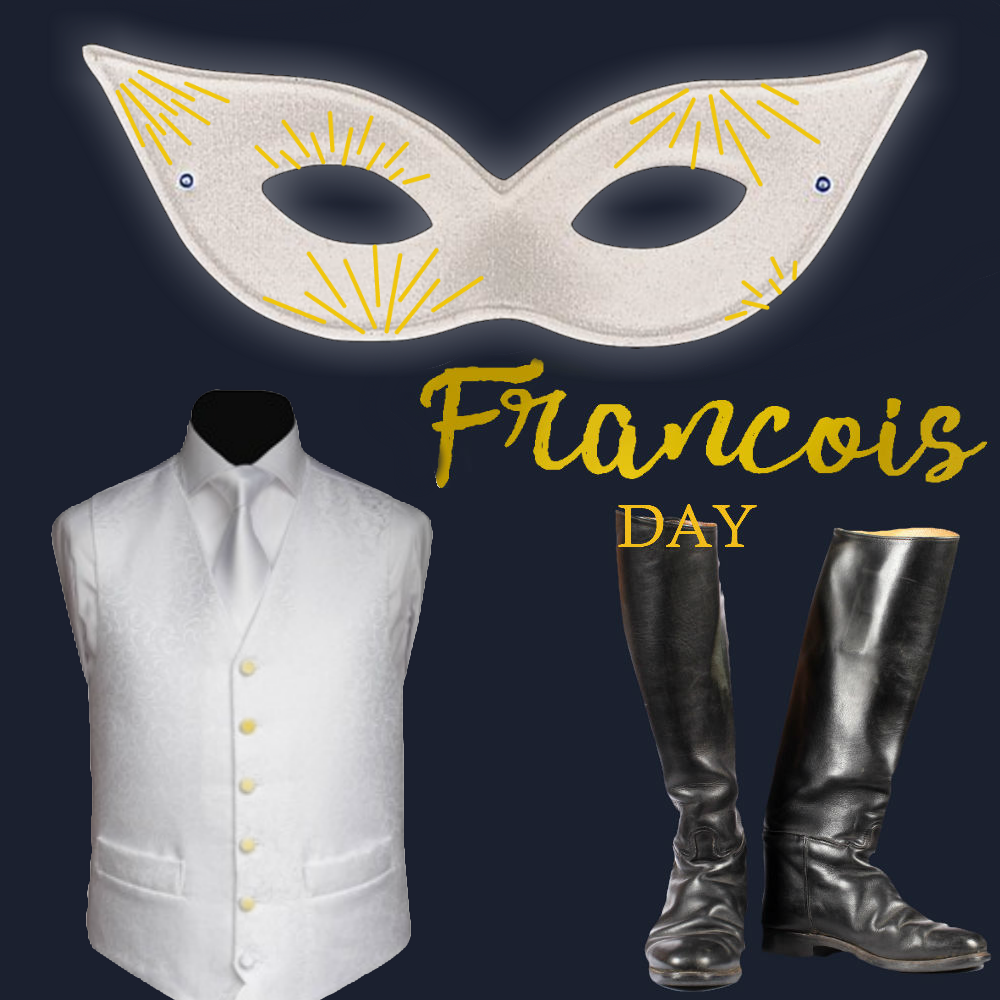 Next is François who is dressed as Day in white and gold with once again, a woolen coat, brocade waistcoat with gold thread, well-tailored breeches, and knee-high leather boots. A golden sunburst domino adorned his face.

I love how François is a POC in this novel despite the times and Jae-Jones does a great job of showing the racism against blacks in this area and time period, noting how people stare at the contrast between his skin and the white clothing as well as how despite growing up in high society, he will never be one. 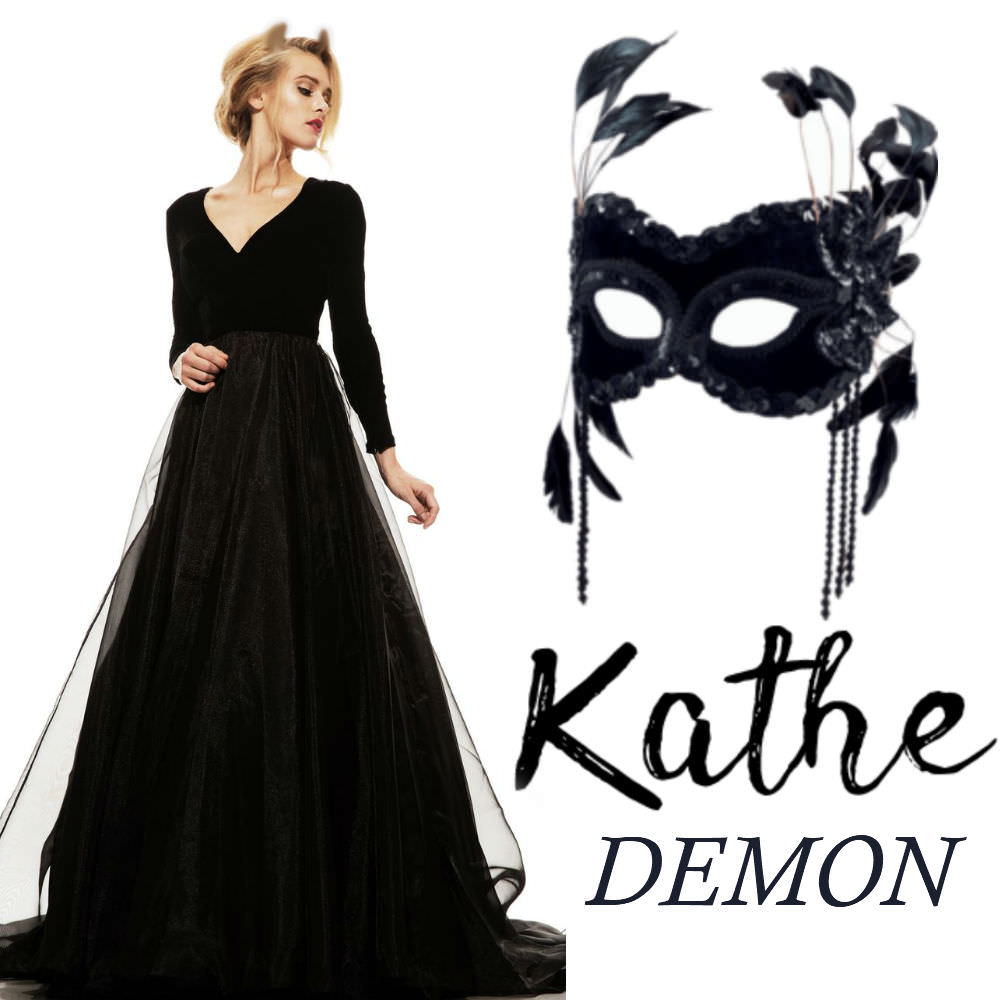 Käthe surprised everyone with her choice to be a Demon, wearing black velvet and silk and lace in her curls that were formed to resemble horns growing from her head. She was definitely a stunner with her dramatic outfit and also the savior of the night for making all of these beautiful costumes!

There’s a lot of the relationship between Käthe and Liesel which is explored in this novel–and themes about the bearing of weight and responsibility and others hearts made their dynamic really profound. 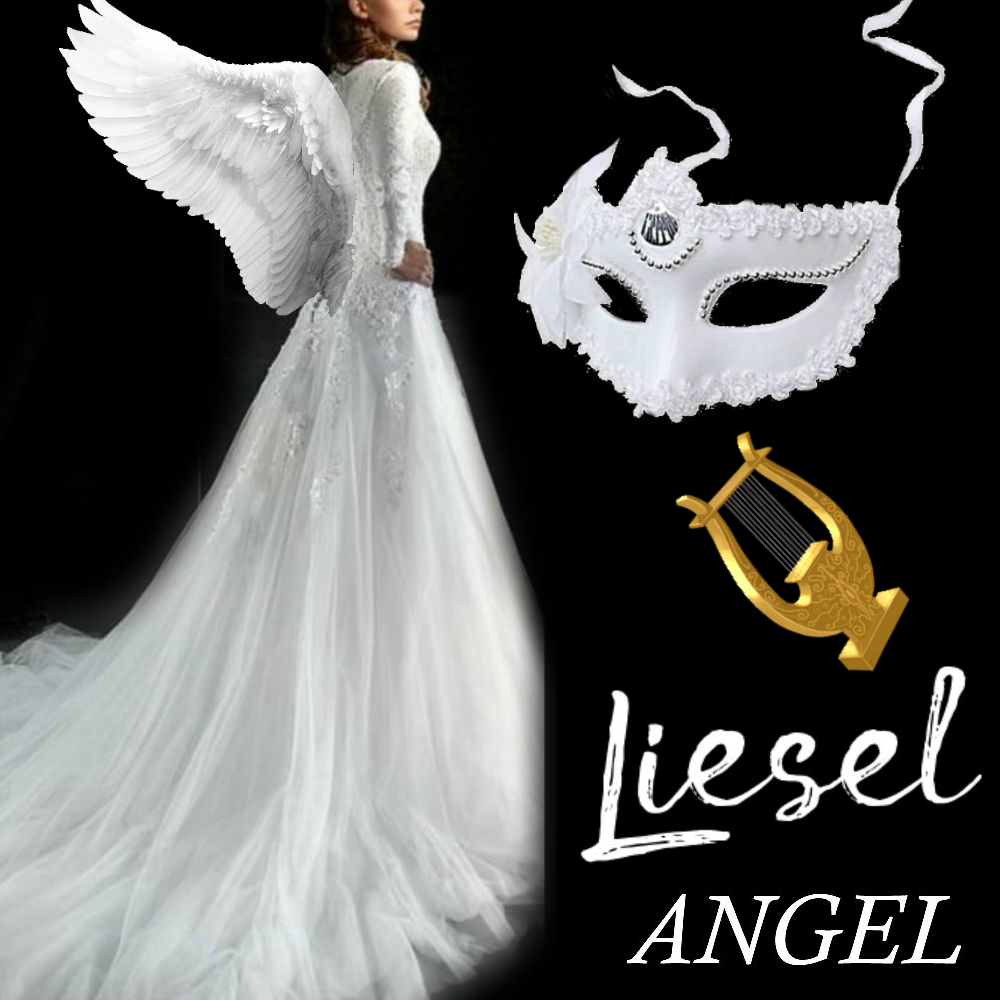 Lastly, we have the one you’ve all been waiting for–Liesel! This is the least canon of all the outfits.

She’s supposed to be wearing a floating, ethereal gown of fine white muslin (that’s tulle, not muslin) with a brocae cape in the shape of folded angel wings from her shoulder blades to the floor (obviously I gave up entirely on this aspect and just used actual angel wings). Liesel carries a lyre to complete the Angel look with the braided gold in her hair as a halo.

Liesel…definitely goes through a lot at this party (remember, don’t take drinks from strangers) and that hedge maze (you’ll have to buy the book to understand) was real tricky, that’s for sure.

I bet al the characters had an exciting night at Count Procházka’s (and his wife’s) party! To learn more, you’ll have to track down a copy of Shadowsong for yourself!

Six months after the end of Wintersong, Liesl is working toward furthering both her brother’s and her own musical careers. Although she is determined to look forward and not behind, life in the world above is not as easy as Liesl had hoped. Her younger brother Josef is cold, distant, and withdrawn, while Liesl can’t forget the austere young man she left beneath the earth, and the music he inspired in her.

When troubling signs arise that the barrier between worlds is crumbling, Liesl must return to the Underground to unravel the mystery of life, death, and the Goblin King—who he was, who he is, and who he will be. What will it take to break the old laws once and for all? What is the true meaning of sacrifice when the fate of the world—or the ones Liesl loves—is in her hands?

S. Jae-Jones, called JJ, is an artist, an adrenaline junkie, and the NYT bestselling author of Wintersong.

Born and raised in sunny Los Angeles, she lived in New York City for ten years before relocating down to Dixie, where she is comfortably growing fat on grits and barbecue. When not writing, she can be found rock-climbing, skydiving, taking photographs, drawing pictures, and dragging her dog on ridiculously long hikes.

Want to try your luck at winning a copy of Shadowsong for yourself? One lucky winner will receive a hardcopy of this novel (US only)! Enter through the link in the button below!

Thank you so much to Wednesday Books/Macmillan and The Fantastic Flying Book Club for sending me a finished copy of Shadowsong in exchange for an honest review!

Check out the rest of the tour below! (And for more chances to win that finished copy!)

How did you enjoy today’s post? Have you read Wintersong? I totally loved reading it! Feel free to leave your thoughts below!

3 thoughts on “Shadowsong by S. Jae-Jones: Review, Black and White Fashion, and Giveaway!”