Today, I am writing a blog post on math.

I’d like to preface this with the fact that I do not normally write about math, I write about books.

Nevertheless, I’m diverting this blog’s attention for the day to my other passion.

Now, I’m sure you’ve all heard of Goodreads, the online social platform for books & reviewing books & reveling in all sorts of bookish goodness.

And you may have also heard of how some people on this platform, when they see a 1 star review for a book they think doesn’t deserve the 1 star, will give it 5 stars to cancel the 1 star out. And this works the other way too, giving 5 stars to cancel a 1 star.

Before we continue, I’d like to add a disclaimer about this post. This post does not involve any personal views on this practice, except for pure, unadulterated WTF-ery about the way people’s minds work & their complete disregard for mathematics. (Which is understandable because some people are one-side-of-the-brain-oriented, but still.) Of course, I have personal views on this practice, but that isn’t the purpose of this post.

The purpose of this post is to inform readers about the craziness of this actual action and why it doesn’t actually achieve what anyone wants it to achieve.

For my purposes, I’ll be using the example of a person seeing a 1 star review and adding a 5 star review, but this mathematical concept works both ways.

And if you’re afraid you’ll be lost in all the math-y logic of it all, do not worry about not understanding the math. It’s nothing more than basic addition and division (I do go into calculus just to hang with the cool cats, but it’s really unnecessary and mostly for bragging purposes).

Many people, when they do this, usually have this goal in mind:

BUT THIS IS NOT HOW MATH WORKS. Let’s use an example.

I photoshopped a fictional Goodreads book with a food-related summary to serve our purposes. The things you need to know about it is that it currently has a 4.2 rating and 6 ratings total.

Now, someone goes and rates my fabulous book with a 1 star rating (bringing it up to 7 ratings and a 3.7 average).

How did I get those numbers? Simple. With averages. You add the values of all the ratings up (1, 2, 3, 4, or 5 as the rating value for each) and then divide by the number of ratings.

And so, to find what the average was with 7 ratings, I just used the formula to find the new average. You can read my math in the photo below, or just assume I did my average right. 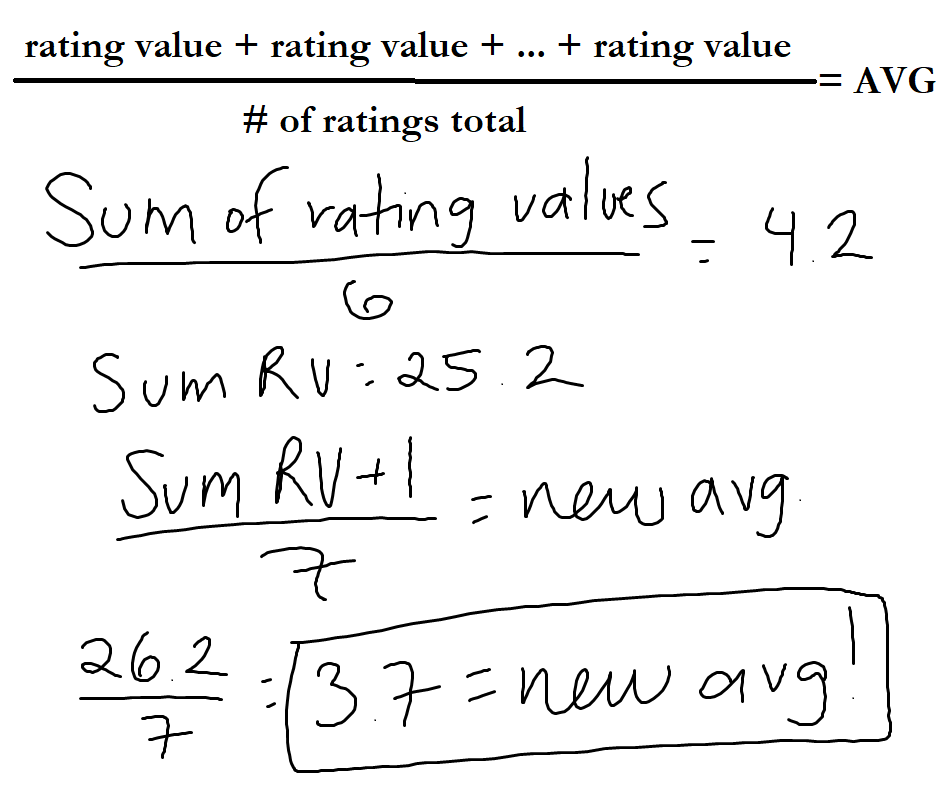 Now, Do-Gooder Debbie comes around and says, “Hey! That’s not fair. Vicky deserves better than this (thank u boo). She should have a fair playing field for her book.” And then promptly goes to give it a 5 star rating.

And while the sentiment is nice, it doesn’t actually achieve what Debbie wants it to achieve. We end up an new average of 3.9 stars from 8 ratings. (Once again, read my math below or just assume I’m right.) 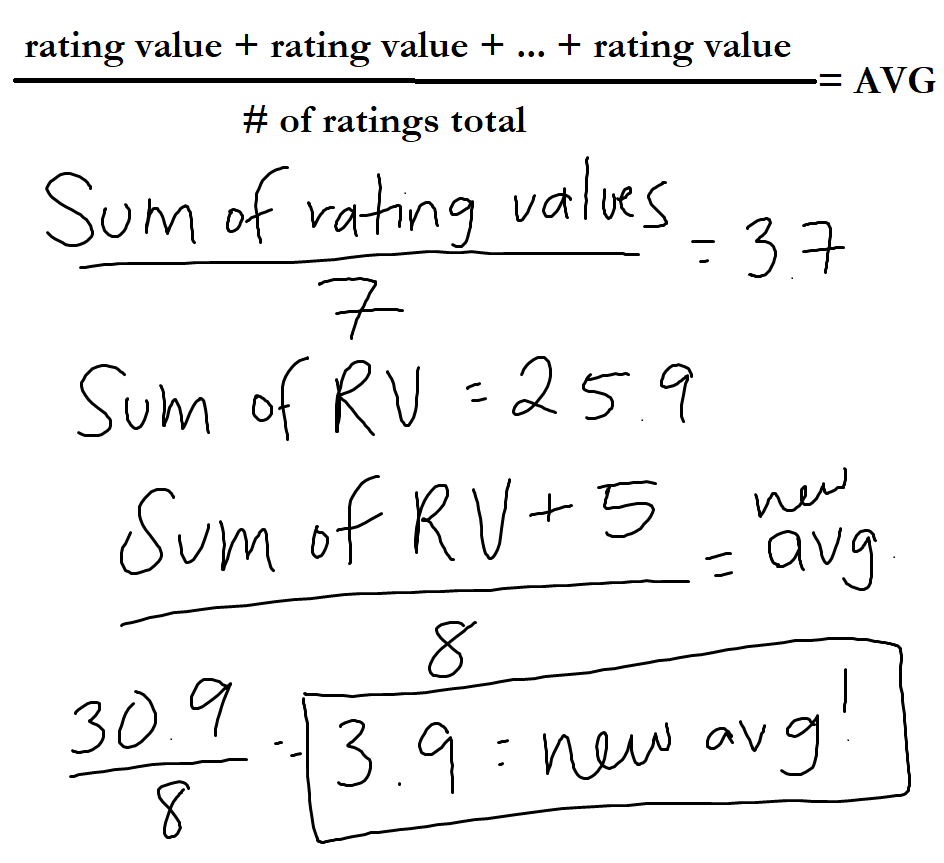 And, as much as I appreciate the gesture. 3.9 stars does not equal my original 4.2 stars, at least, not in this world. (I wish because maybe then my SAT score would be better.)

Now, you see, there are two more lines of thought that I must pursue (besides whether you helped or not). This idea on a larger scale (one hundred 5 stars to negate one hundred 1 stars) and this idea on an infinitely large scale (searching for that perfect five stars).

We’ll start with an expansion of this topic.

I’m not going to write out the math for you, but you can plug in what I did into your calculator to double check, if you’re super doubtful. (Mind you, please keep the parentheses where they belong).

And so, the point of this is, the more times the 5-star-1-star cycle happens, the closer your average approaches the unhelpful number 3.

Which brings me to limits. Yes, that’s right. Calculus.

BUT WAIT! Before you go “Oh god, I’m not gonna get this,” and skip to the end of this post, here me out. We won’t be doing actual calculus (unless you want to). Just fiddling with an idea that is commonly used in calculus. Just try and follow along, for my sake, okay?

So, this is all to prove my point that as the number of 5-star-1-star cycles increases, the more your Goodreads rating goes closer to 3 stars.

(If you’ve taken calculus, I assume you understand where I would have taken this blog post (limit as x→infinity as the number of 1 & 5 star ratings keep going up). I won’t really be catering to you, but just know I had y’all in mind.)

But this can also apply to people with purely a 5 star goal. If, for instance, the 1 star raters don’t retaliate and you think, “Gosh, let me get this rating to a perfect 5 stars,” then the world will be laughing in your face because this will never happen.

I mean, yes, it will happen in the sense that it rounds up to 5, but think about it some more.

Of course, Goodreads will just round 4.99 to 5. But in theory, you’ll never have a perfect 5 star average rating. You’ll have a 4.9999 which will keep going with the number of 5 star ratings added

(Once again, to my calculus buddies. Consider this:

(yes, you might want to use L’Hospital’s rule. or maybe just logic. whichever.)

And so, if you’re looking for the perfect 5 and you have a non-5 rating, it’s never gonna happen. (It’ll do some rounding though!)

By now we’ve considered both lines of thought–an infinite number of 5s to reach the perfect 5 (which will never happen) and an very large number (aka infinite) of 5-star-1-star cycles to end up pushing you somewhere around 3.

The last thing we have to consider is psychology to determine whether or not your 5 star rating actually helped me and my Book of Math with it’s veggie summary. Whether the 5-star-1-star cycle will actually happen. Because if it doesn’t happen, then you can claim you did something positive (although not as positive as you may have wanted because 3.9 ain’t a 4.2). You did something to combat the unfair rating and bring the average closer to what it used to be.

But, if other people see your rating and think you’re the one being unfair, will this cycle continue? Will the people add a 1 star to spite you, while all you were trying to do was spite the 1 star person?

This is where I leave you off, because I am no psychology expert (but I am pretty darn good at basic algebra and non-complicated limits).

Some things to consider:

What did you think of today’s post? Were you able to follow along with my train of thought?