I am generally not a fan of people on covers.

Now, I’m no misanthropist, but I think seeing people on covers can be detrimental for both the book and the reading experience.

Seeing the full face of characters can change how you look at a character–just as how seeing a movie changes the face of that book (series).

I like books more than I like watching television or movies (this would be a movie critic blog if that was the case, not a book blog) because I get to imagine the world how I want it. I can imagine the people in my own way, with a few scattered freckles or an upturned nose.

But seeing faces, more specifically full faces, on covers can ruin what I imagine the characters to look like. I’ve talked about this before in one of my earlier Cover Geeks about An Ember in the Ashes’ cover change as seeing people on covers can ruin my imagination.

Besides this, a lot of the times seeing human models (or even graphics) can ruin the cover’s theme and make it seem different than the main idea of the novel.

This may all just be me and my penchant for more graphic based, aesthetic covers, but seeing people takes away some of the magic for me. I find these covers generally less appealing, though it’s all personal preference. 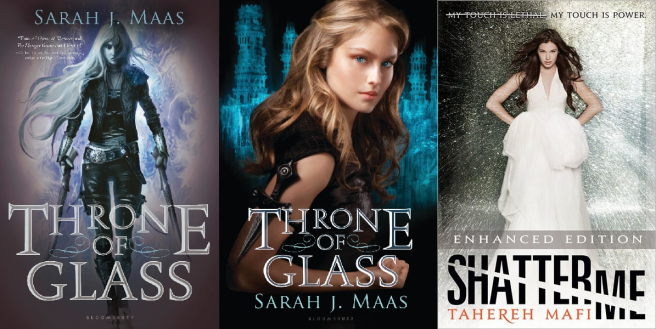 Sorry, but these covers are just not for me.

Both Throne of Glass covers include a person who is not what I expected Celeana to look like. The human model is okay, but she just doesn’t make the cut because she looks so clean and more “princess with a dagger” instead of “low-life assassin.” It contradicts the actual book.

The graphic model has a much more accurate theme, but now all the covers are distorted and she looks like she’s part of one of those video games. Celeana is blonde, not white haired. The lighting in the entire cover ruins her for me, and the fact that she looks like she came out of a video game instead of a cool fantasy world.

Neither cover screams fantasy to me, when this is what these books are.

And the original Shatter Me cover was so disappointing. I’m very thankful for the beautiful new ones with the very aesthetic eye on the cover.

The girl’s face looks like it was photoshopped on and the shadow below her neck is unnatural. And what the heck is up with that funky dress?

The text was bland and the girl is not what I imagined Juliette to look like.

I think that sometimes, leaving the characters up to the readers’ imagination is a better choice than using models.

These are some gorgeous covers with people on them.

When Dimple Met Rishi is such a cute book, and I really like the cover. I think it was very important to show a person on this cover, whether it was a graphic or a model. A big part of this novel is the Indian culture aspect so showing that in the cover was very well done. Since she’s partly cut off, parts of her are left to your imagination (like her hair part).

Once and For All is quite the stretch to claim people on a cover, but I have no qualms on doing so. You can see a small squint of Louna at the bottom so this novel doesn’t seem so…drab. The flowers and beveled silver text are also very nice touches. It works well with the overarching theme of the novel.

As much as I dislike these books, The Selection has a pretty decent cover. It shows almost exactly what this book is about–high society life and lots of dressing up. And the fact that America (I still can’t get over her name) has part of her face covered allows us to use our imagination but still keep the basis of her basic features.

What is your opinion on covers with people on them? Do you have some examples of good ones? Feel free to leave your thoughts below!