After finishing what is now one of my favorite fantasy series, Sabaa Tahir’s An Ember in the Ashes and A Torch Against the Night, a few months ago in 2 DAYS, I was waiting & cyber-stalking Sabaa Tahir for news of the next book in the quartet. (If you haven’t read the books, you should definitely go check them out now, right here!) I finally got info on the 14th of August (2 days before I wrote this post).

Book 3 will be titled A Reaper at the Gates which sounds super cool & Helene-ish, who is like the most bad-ass antihero ever! Woohoo!

And although I have to wait until 2018 for book 3, I can live off the hype for a few months.

Unfortunately, however, things were switched up a little for us. Instead of a cover matching books 1 & 2, book 3 has a new cover as well as a revamp for 1 & 2.

Now, I’m not too peeved about this because I haven’t purchased the novels (I almost always wait for the box set to come out for series because I like boxes & bonus stuff like cool maps &, well, matching covers).

But, I know some of the fandom is in a little turmoil as their books will not match anymore which, frankly, sucks. Lucky me being saved by my greediness for bonus features.

The point of this post is to weigh the differences, positives, and negatives of the new cover. Part of this is expanded upon from my Goodreads post & is more eloquent than non coherent fangirling.

Please note that this is my personal opinion and is not based off of seeing the physical hardbound or paperback copies, but instead based off of online images, i.e. Tahir’s Instagram post. 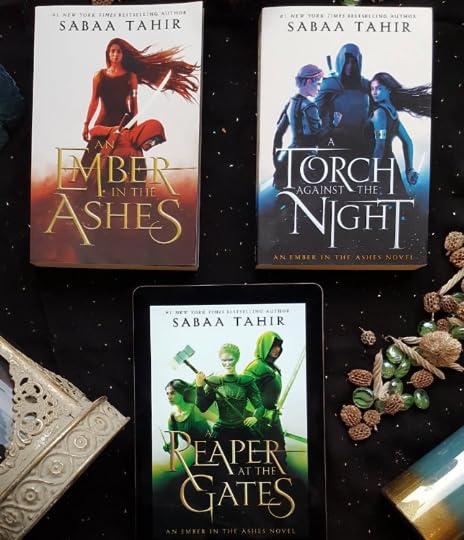 For the beautiful brown kids who deserve to see themselves on books:You’re heroes too. And these covers are for you: https://t.co/u0KOXr8uZJ

I don’t have enough information to judge which is a better cover choice for book three, especially without reading the book or feeling the cover (is it papery like A List of Cages? velvety like Flatiron/Macmillan’s Caraval? plastic-y like Katherine Tegen’s The Beginning of Everything?) and seeing how they used the UV plastic coating, embossing, and metallic elements.

Hopefully I’ll be able to update this post or post again about the new cover changes on one of my favorite book series once I get my hands on a physical copy (it’s so far away!).

Despite the controversy surrounding the cover change, I still find it refreshing to see the new covers & I cannot wait to read book 3, A Reaper at the Gates, coming out on April 10th, 2018!

What do you think of the cover change for Sabaa Tahir’s books? Feel free to leave a comment below with your thoughts!

P.S. I’m trying to add a third blog post each week on Tuesdays which will hopefully all be Cover Geek posts, bringing you info on the best (and worst) YA covers out there!

8 thoughts on “Cover Geek #1: An Ember in The Ashes Series by Sabaa Tahir”