Welcome to my stop on the blog tour for Jessica Brody’s latest novel, The Chaos of Standing Still! There’s all sorts of fun stuff in this blog post, such as, but not limited to, my dream cast, a playlist, and a giveaway! Read on for more.

Ryn’s haunted by her past after her best friend’s death in a car accident nearly a year ago. Trapped in the Denver International Airport during a never-ending blizzard on the one-year-anniversary of her best friend Lottie’s, death, Ryn’s forced to face her past through the charm of romance, the uniqueness of strangers, and the magic of ordinary places.

For the first time ever, Ryn will try to move on. And maybe that’s a start.

When I came in, I was expecting something a lot more romantic and similar to The Sun Is Also a Star by Nicola Yoon, but I was instead slapped in the face with this heart-trending novel about grief and death. What started out disguised as a cute contemporary romance (there was a cell phone swap…) became a journey for Ryn to handle the grief from her best friend’s death.

This is a 24-hour novel, which is a hit-or-miss sometimes. I think this was a hit because id didn’t seemed as rush as some 24-hr novels usually do. It wasn’t like the characters were trying to do great things–it was just Ryn developing and growing as a person, which is just as interesting as a fantastic alien space battle.

This novel was so much more moving than I expected it to be. Although it was off to a shaky start, it flipped over when we started learning more of Ryn’s past.

Ryn is such an interesting character. I definitely judged her way too much at the beginning, which was definitely why the start was so shaky. But when we started learning about her background, I realized I was too quick to jump to conclusions and should have learned more about her before deciding my opinion. She was irrational at times, moody and possessive, but all of it was very understandable.

Her character arc was so complex, she was very dynamic through the novel which I really enjoyed.

Likewise, Xander’s background was also developed well and I really liked how he and Ryn were juxtaposed, but the romance was a very, very small subplot.

Likewise, the other characters were cute and quirky, like some of the airport workers they meet.

This was a very character based novel, and so the plot really only worked to help Ryn develop. The part I didn’t like was how it was somewhat unrealistic at times–certain quirky people would just pop up when convenient and some of the character entrances seemed a little forced to me. I liked the pacing though, and the clichés, as much as I wasn’t a fan of the particular ones in this novel (it’s hit or miss for me with clichés), I do think they worked really well in furthering the plot.

Most of all, I liked all the themes about grief. I think that was the highlight of the novel. Ryn’s development and her handling of her friend’s death was very profound. Although I’ve never experienced anything close to what happened to Ryn, I felt like I could relate to the suffering she was going through.

The Chaos of Standing Still was a delightful contemporary novel to read and I am so happy I got a chance to read it and be a part of this blog tour! It was so moving and I think Ryn’s story won’t leave me for a very long time. I would definitely recommend it to lovers of 24-hour novels or contemporaries about grief.

You can purchase The Chaos of Standing Still now at major booksellers!

Thank you to Simon Pulse, NetGalley, and the Fantastic Flying Book Club for providing me with a copy of this novel in exchange for an honest review!

Even though I’m not very much of a movie person, I just had to try my hand at coming up with a dream cast for this novel!

Rowan Blanchard as Ryn, Sabrina Carpenter as Lottie, and Keiynan Lonsdale as Xander.

I wasn’t entirely sure on the physical descriptions of both girls, but I think the personalities of both these actors would work super well if this ever became a movie (one can hope, right?). I also think Rowan Blanchard is an awesome enough actress to be able to portray the immense grief and emotional blocks Ryn feels for a large portion of the novel.

And then Keiynan Lonsdale as Xander seems so perfect! Besides being swoon-worthy, I think he captures that “internally tortured child of famous parents” feel really well. I could totally envision him as Xander in this novel.

Although my music tastes don’t stray very far from Broadway musicals, I felt like I needed to demonstrate all the crazy emotions I was feeling from this novel.

Highway to Hell by AC/DC

Parts of this novel just seemed very chaotic to me (maybe that’s why it’s called The Chaos of Standing Still). I mean, a snowstorm? Talk about utter madness. So I thought this song would help me express how some parts of this novel just felt very hard rock frustration. Like things were going terribly for Ryn and there was nothing she could do about it. Hence, Highway to Hell.

Yet, at other times, there was this all-encompassing grief that drowned everything else out for Ryn. Sometimes this song just makes me cry when I’m feeling super emotional, and I think it really hits the spot for Ryn when thinking about Lottie’s death.

Kiss Me by Sixpence None the Richer

There was also the romantic subplot between Ryn and Xander, which is why I just had to include this. The singer’s voice has that lilting quality that sounds sad and sweet at the same time, which was very representative for what was happening between Ryn and Xander because they were falling in love yet it was still sad because of the struggles they still have to overcome.

If I Die Young by The Band Perry

If Lottie could send a message, I feel like this is what she would have told Ryn. Lottie was a wild child, someone who tried new things and never seemed afraid. She wouldn’t have wanted Ryn to live with grief, and so this song seemed like the perfect ode for her.

Gosh I’m such a nerd but this was the first airport song my mind jumped to. After watching Alton Brown live and hearing his hilarious rendition of the (disastrous) after effects of eating a shrimp cocktail, this became my go to airport song. Although I picked this kind of as a joke, I do think it helps embody the disastrousness of airports that I mentioned earlier. 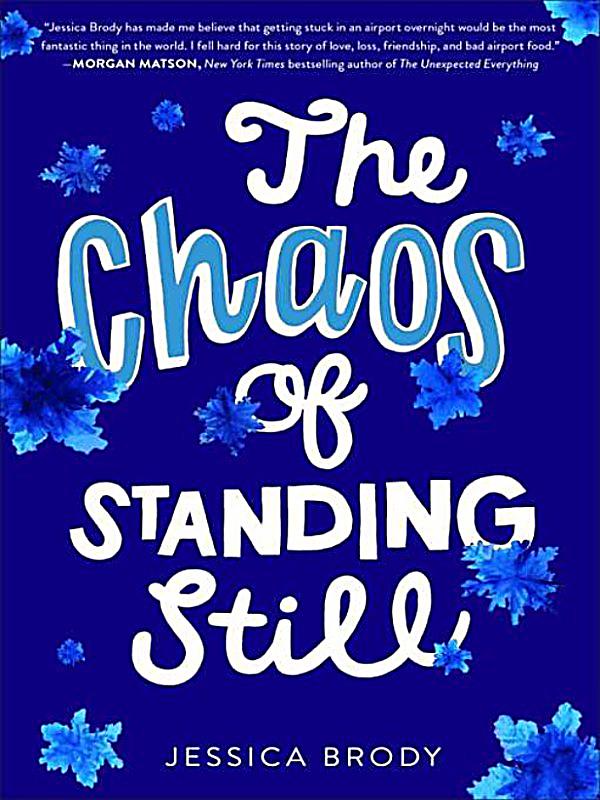 The Chaos of Standing Still

Over the course of one chaotic night stranded at the Denver airport, Ryn confronts her shattered past thanks to the charm of romance, the uniqueness of strangers, and the magic of ordinary places in this stunning novel from the author of Boys of Summer.

Ryn has one unread text message on her phone. And it’s been there for almost a year.

She hasn’t tried to read it. She can’t. She won’t. Because that one message is the last thing her best friend ever said to her before she died.

But as Ryn finds herself trapped in the Denver International Airport on New Year’s Eve thanks to a never-ending blizzard on the one-year anniversary of her best friend’s death, fate literally runs into her.

And his name is Xander.

When the two accidentally swap phones, Ryn and Xander are thrust into the chaos of an unforgettable all-night adventure, filled with charming and mysterious strangers, a secret New Year’s Eve bash, and a possible Illuminati conspiracy hidden within the Denver airport. But as the bizarre night continues, all Ryn can think about is that one unread text message. It follows her wherever she goes, because Ryn can’t get her brialliantly wild and free-spirited best friend out of her head.

But tonight, for the first time ever, she’s trying. And maybe that’s a start.

As moving as it is funny, The Chaos of Standing Still is a heartwarming story about the earth-shattering challenges life throws at us—and the unexpected strangers who help us along the way.

Jessica Brody knew from a young age that she wanted to be a writer. She started self “publishing” her own books when she was seven years old, binding the pages together with cardboard, wallpaper samples, and electrical tape.

After graduating from Smith College in 2001 where she double majored in Economics and French and minored in Japanese, Jessica later went on to work for MGM Studios as a Manager of Acquisitions and Business Development. In May of 2005, Jessica quit her job to follow her dream of becoming a published author.

Since then, Jessica has sold over twelve novels for teens, tweens, and adults including 52 Reasons to Hate My Father, The Karma Club, My Life Undecided, and the three books in the Unremembered trilogy, the first of which is currently in development as a major motion picture by the producers of The Vampire Academy, Zero Dark Thirty, Life of Pi, and Slumdog Millionaire. In 2016, she will release two new contemporary novels, A Week of Mondays (August) and Boys of Summer (April), and in 2017, her debut middle grade novel entitled, Addie Bell’s Shortcut to Growing Up, will hit bookstore shelves.

Jessica also writes books for the Descendants: “School of Secrets” series, based on the hit Disney Channel Original movie, Descendants!

Jessica’s books are published and translated in over twenty foreign countries. (Click here for a full list of foreign sales and publishers.) She currently splits her time between California and Colorado.

Can’t wait to get a copy? Enter the giveaway where 1 LUCKY WINNER will receive a copy of The Chaos of Standing Still! (US only).

Thank you to the Fantastic Flying Book Club for arranging this blog tour! Don’t forget to check out the other stops!

I hope you all enjoyed my stop of The Chaos of Standing Still blog tour! Are you excited to read this novel?

2 thoughts on “The Chaos of Standing Still by Jessica Brody Blog Tour (and Giveaway!)”