Looking for a book full of mystery, magic, and stories from the past? (And also a giveaway for said book?)

Well, look no further because Nova Ren Suma’s stellar novel, A Room Away from the Wolves, has got you covered!

It’s such a mysterious and atmospheric story about a girl, Bina, who is asked to leave her home by her mother and new family. Bina will–but on her terms, and she ends up at Catherine House, a young women’s residence where her mother stayed eighteen years ago. With an old suitcase and a fresh black eye, Bina is drawn to the tragic history and dark and magical secrets of Catherine House, and she’s drawn to her downstairs neighbor Monet who’s both intriguing and dangerous.

As Bina’s lease begins to run out, and nightmare and memory get tangled, she will be forced to face the terrible truth of why she’s come to Catherine House and what it will take for her to leave… 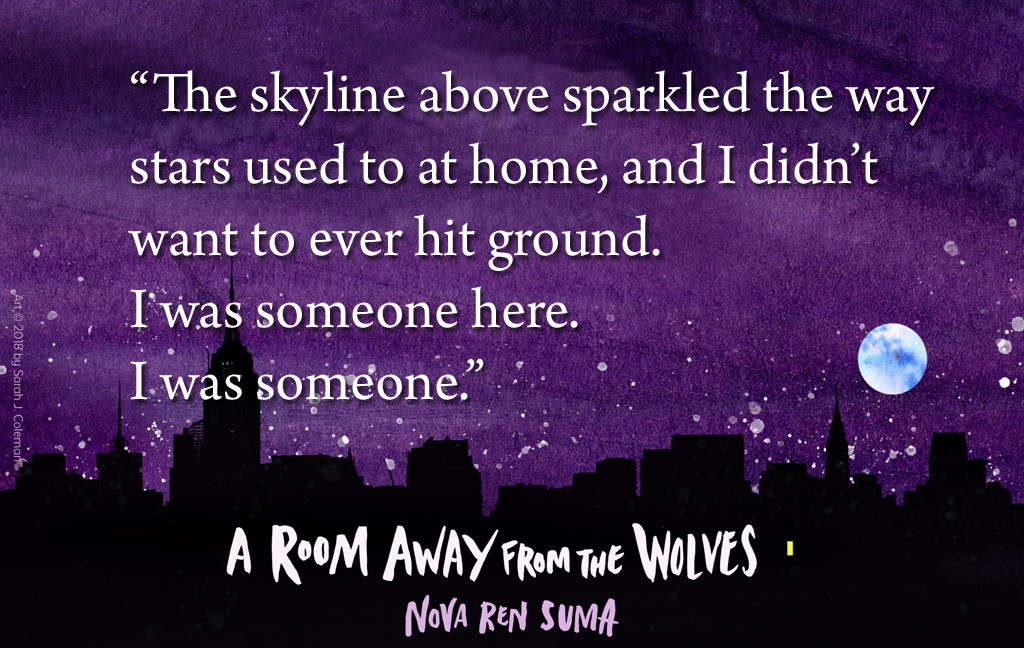 Doesn’t this quote sound awesome?! It hints a lot at the allure of Catherine House and the dangers it may bring with its refuge…

I really enjoyed this! It’s such a solid read, and there’s so much mystery and fictional history behind it, it’s very cool.

I’m not exactly sure how to describe the atmosphere of this book (but it has a really distinct atmosphere), so I’d say something like Miss Peregrine’s Home for Peculiar Children crossed with The Dark Beneath the Ice by Amelinda Berube. It’s sort of spooky, sort of mysterious, and all sorts of odd in between. There’s all these mysterious things happening in the home for girls, with the creepy portraits that move to the spirit-summoning rituals to the ghosts showing up.

Suma is such an awesome writer. Really. She’s great at her craft, and the way she assembles the novel is with purpose, which I really enjoyed. It was nice reading a well-written book and one that makes sense and was well-plotted, compared to some of the messier novels out there.

You can tell Suma spent a lot of time fine tuning this, and it really shows.

But, I also wasn’t super into the main character. She was cool and although I didn’t dislike her, I also just didn’t care about her either. I was mostly apathetic to her and she was a means for me to finding out more on the story.

I can barely remember her name (it’s Bina), and although I really sympathized with her initial struggle (Suma does a good job of putting us in Bina’s headspace as she’s kicked out of home), I also felt like Bina didn’t really portray the emotional turmoil and surprise and shock at paranormal happenings well.

It’s like some scenes lacked a certain level of intensity, which I was looking for and wanted from this novel. I wanted to be super invested, but with this, I was reading it to enjoy the craft more so than to be immersed in the story.

I still loved the paranormalish aspect with Catharine, and the home for girls has a lot of secrets you’ll discover as you read this book. It’s always satisfying to uncover a mystery, and Suma just did a really good job of putting it all together.

Plus, I enjoyed some of the other side characters and how the flashbacks were incorporated. Mona is such an interesting character with a lot of hidden depth, and I enjoyed how Suma built her. And the way the flashbacks/unreliable fuzzy moments were portrayed was something I really thought was incorporated well and smoothly.

A Room Away from the Wolves is a really well-written book. I just wasn’t invested too much in it. This was a really good and solid read, but I wasn’t completely in love. I also don’t think it was a bad book. It just wasn’t 100% for me, which is why it isn’t rated higher even though the craft and technique warrants a higher rating. 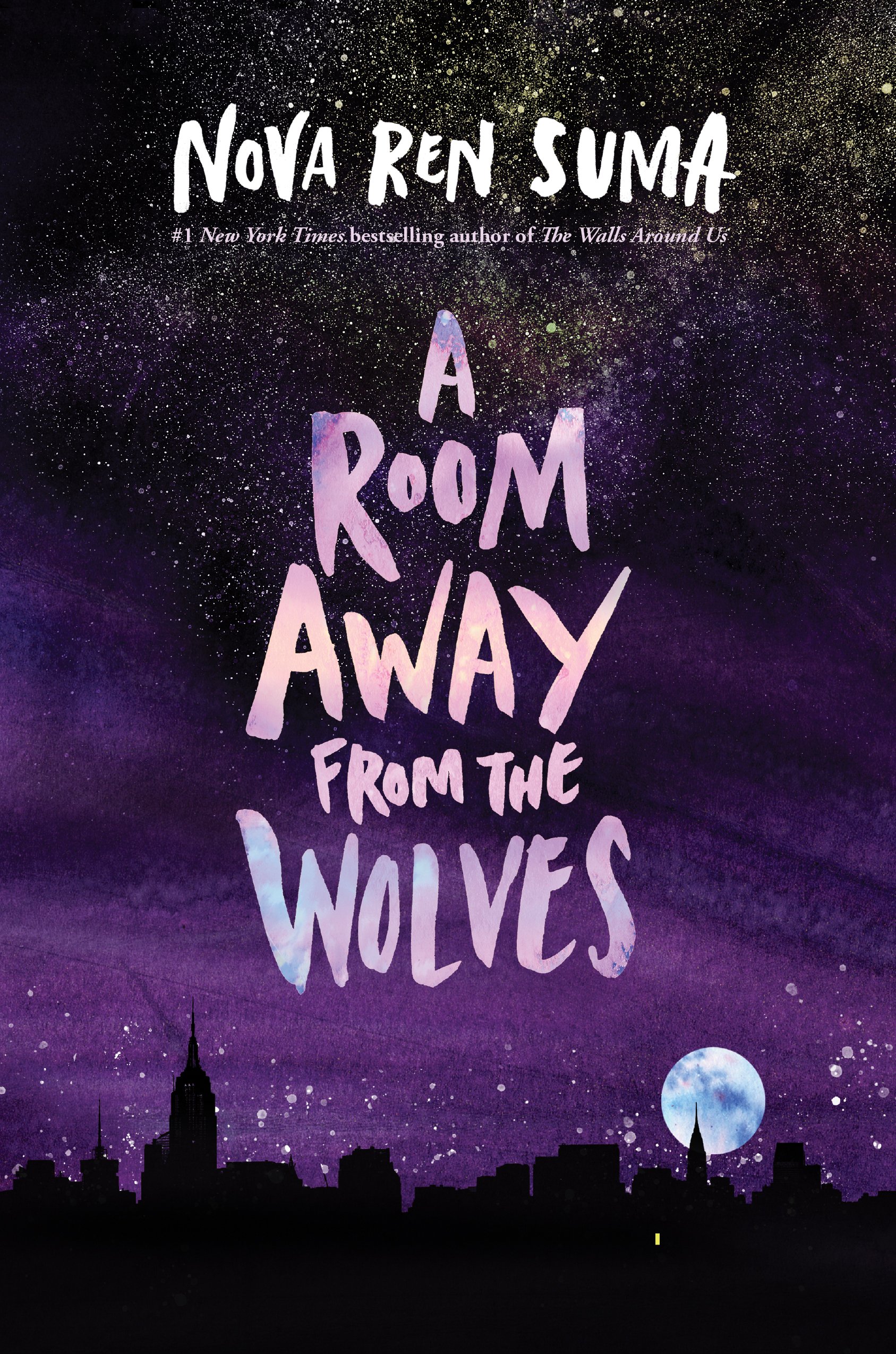 Bina has never forgotten the time she and her mother ran away from home. Her mother promised they would hitchhike to the city to escape Bina’s cruel father and start over. But before they could even leave town, Bina had a new stepfather and two new stepsisters, and a humming sense of betrayal pulling apart the bond with her mother—a bond Bina thought was unbreakable.

Eight years later, after too many lies and with trouble on her heels, Bina finds herself on the side of the road again, the city of her dreams calling for her. She has an old suitcase, a fresh black eye, and a room waiting for her at Catherine House, a young women’s residence in Greenwich Village with a tragic history, a vow of confidentiality, and dark, magical secrets. There, Bina is drawn to her enigmatic downstairs neighbor Monet, a girl who is equal parts intriguing and dangerous. As Bina’s lease begins to run out, and nightmare and memory get tangled, she will be forced to face the terrible truth of why she’s come to Catherine House and what it will take for her to leave…

Praise for A ROOM AWAY FROM THE WOLVES

“Terrific . . . a Gothic love letter to secret places of New York City and the runaway girls who find them.” —Kelly Link, author of Get in Trouble, 2016 Pulitzer Prize Finalist in Fiction

“Suma drapes her dark, enigmatic novel in a gauzy, supernatural veil, under which readers will observe a runaway teen’s search for safety and an understanding of her mother’s past . . . Suma’s surreal writing examines the blurred edges of life, lies, freedom, and mother-daughter relationships, leaving the reader with questions and a tangled sense of wonder.” —Julia Smith for Booklist

“Nova Ren Suma surpasses herself with this gorgeously-told, mesmerizing, tense and twisted story about the ways in which mothers fail their daughters, the lies that daughters tell their mothers, and the love that girls show one another when all the wolves are closing in.” —Laura Ruby, National Book Award Finalist and Printz-Winning author of Bone Gap

“Eerie and atmospheric as only Nova Ren Suma can write, A Room Away From the Wolves is a page-turning thrill. Its unforgettable protagonist is cut from the sharpest sentences and the achiest pieces of life—I couldn’t tear my eyes away. Gulp this one down and prepare to be left shivery and spooked and a little bit heartbroken.” —Emily X.R. Pan, New York Times bestselling author of The Astonishing Color of After

Nova Ren Suma is the author of the #1 New York Times bestselling The Walls Around Us, a finalist for an Edgar Award. Her new novel A Room Away from the Wolves is forthcoming September 4, 2018, from Algonquin. She also wrote Imaginary Girls and 17 & Gone and is co-creator of FORESHADOW: A Serial YA Anthology. She has an MFA in fiction from Columbia University and teaches at Vermont College of Fine Arts. She grew up in the Hudson Valley, spent most of her adult life in New York City, and now lives in Philadelphia.

Thank you so much to Algonquin YR and Jean Book Nerd for sending me an early finished copy in exchange for an honest review! Don’t forget to check out the rest of the stops on the tour below!

Do you love mysterious novels? Ones with some magic and some intrigue and a dash of tales long forgotten?

12 thoughts on “A Room Away From the Wolves by Nova Ren Suma: An Atmospheric Novel on Resilience, Mystery, and Magic (+ INTL Giveaway!)”