Welcome to my stop on the blog tour for Somaiya Daud’s (inter)stellar debut novel, Mirage, hosted by Aimee, Always!

This is such an awesome and unique science fiction novel that is so rich in Moroccan culture.

Amani lives in a star system dominated by the brutal Vathek empire, and she dreams of a life before the occupation, full of poetry and a sign from Dihya that one day, she, too, will have adventure, and travel beyond her isolated moon.

But when adventure comes it’s through a kidnapping by the regime to act as the secret body double to the cruel half-Vathek Princess Maram in the royal palace. Amani must appear in public as Maram, ready to die in her place, because the Princess is so hated by her people.

Yet, Amani can’t help but enjoy the palace’s beauty—and her time with the princess’ fiancé, Idris. But the glitter of the royal court belies a world of violence and fear. If Amani ever wishes to see her family again, she must play the princess to perfection…because one wrong move could lead to her death. 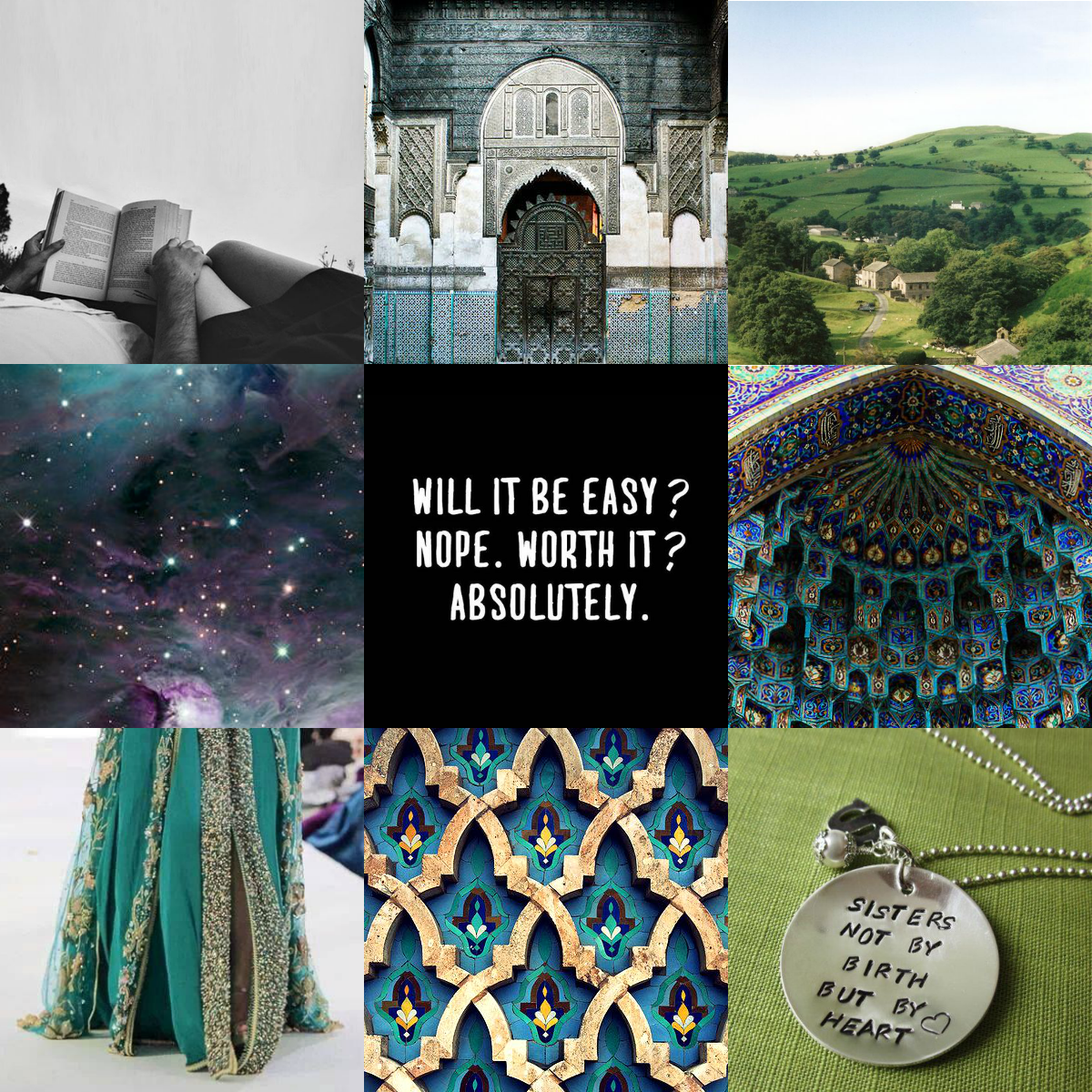 So, I put together this aesthetic for Mirage so you could really get a feel for what the novel is like. There’s a lot of great elements in this novel, and I really wanted to go in depth with some of the images I’ve featured here!

So, a big part of the relationship between Amani and the princess’ fiancé Idris is their connection over knowing language and not knowing language. Amani is familiar with the language of her people, while Idris is not because he was raised to be Vathek.

The concept of reading, especially poetry, is a big part of the novel. I don’t want to spoil anything, but this is a huge part of how their relationship develops, so if you like the idea of romantic reading dates, definitely check this out!

Amani comes from a small farming village on a moon, and it’s just where her family is from. Amani loves her family, and although being kidnapped is not the type of adventure she might have expected, she’ll definitely learn a lot from it.

Will It Be Easy? No. Will It Be Worth It? Absolutely. (center)

This is like, the embodiment of the relationship between Amani and Maram. I don’t want to spoil too much and I’ll go into it with the next photograph, but the way Amani recognizes the good in Maram and goes out of her way to bring it out of Maram is something that I feel like this quote embodies.

Maram is difficult and prickly and had a hard upbringing, but I think the way she and Amani interacted shows how much a good friend can help.

Sisters Not By Birth But By Heart (bottom right)

This one is also about Amani and Princess Maram’s relationship.

There’s no spoilers, but eventually some words are said about sisterhood that were really sentimental and meaningful. Amani is the only girl in a family of brothers, and with Maram, she gets to be the de facto older sibling of sorts with Maram. This relationship is one I’m very excited to see more of in the next book!

Mirage has been one of my most anticipated reads for so long. Even though it fell somewhat flat for me, I do think so many people will fall in love with this novel and really treasure it.

The writing is rich and luscious and filled with all sorts of cultural details and descriptions that really immerse you in the world. It was so rich with culture and was really awesome to see an #OwnVoices debut novel showing off Moroccan culture.

Plus, the entire concept is really quite entertaining. I love reading about royalty, and the idea of a body double is so much fun that I hope it’ll start a trope.

I think so many people will love this novel, and it’s so well written, but I just didn’t connect as well, and I think this is because of a few reasons.

1. I expected a lot of really cool sci-fi stuff, but didn’t really get it. I’m a huge science fiction nerd, and when I read my sci-fi, I like it to be really sciencey. Especially space operas and things that occur on other planets.

So Mirage was definitely a surprise of sorts, because when I heard it was sci-fi and not fantasy, I got 10x more excited. But I get where the fantasy comparisons came from, because the whole structure, so to speak, is something you’d very commonly find in fantasy novels.

The colonialist themes (loved those!), the different countries, the princes and princesses and royalty. All of these are usually more common fantasy tropes, and a lot of the novel felt more like a fantasy than anything else, just because of how it was structured and the type of story it told.

Sure, some random tech was referenced from time to time–blasters, robot servants–but overall, it felt like a fantasy world that was patched up with sci-fi to fill the plot holes of removing tattoos and other things that would be hard to accomplish in a magic-less fantasy world.

And so I wasn’t super into the world. Because as rich and luscious the writing and worldbuilding was, it just was not very sci-fi.

This is a book that will appeal very much to fantasy readers. If this book was actually just two continents and had some mysterious way of patching up a few plot holes, this book could have been a fantasy novel so easily.

And so, this is my biggest peeve about this novel, because I felt like it was never really sci-fi, but a fantasy novel shoved into a sci-fi format to take care of plot holes and make it potentially more marketable.

This is mostly a me-problem, but I think my overhyping and high expectations really made this aspect of the book crash and burn. If my expectations weren’t so steep, I feel like I would have enjoyed this way more.

2. And honestly, I was just not in the mood for this book. It’s such a luscious and rich novel, but it also was not as action packed as I expected or wanted.

A lot of this book is politics and wandering around and seeing things and standing places and learning how to be queen without the cringey fashion montage.

Things only really started speeding up till the climax and after, as this isn’t your traditional “girl is trapped against her will” story.

Because the girl doesn’t really try to escape. Ever. In the past, fictional protagonists in this situation try to escape, but I feel like the main character never really tried. She knew that her family would be hurt, and as admirable and true as this was, I felt like she was only passionate about the fact that she’s in a cage when she needed to be for the plot.

In any other mood, I would have loved a subversion of the “girl trapped against her will” trope, but at the moment, I just didn’t really connect with the main character because I wanted something action and space heavy.

This meant I wasn’t as into the romance as I could have been, but I did think Daud did a really good job with the romance and in building it and making it totally swoonworthy!

3. It’s a first book. First books in general have a lot more exposition and don’t wrap things up, so I feel like we didn’t get to see as much of Maram as I wanted. Maram was one of my favorite characters with how interesting she was, and I feel like Daud did a marvelous job of really exposing her complexities and the ways she was more than just a cruel daughter of a cruel king.

Overall, this is a really great book, but it just ended up as not one of my favorites due to my own more personal dislikes of some elements and not being in the mood for this book. I definitely have the potential to fall completely in love with the second book or this book on a second reread, but I think this time around, it just didn’t completely click with me.

This is such a well-written book and is rich with culture. I think so many people will love this, and definitely recommend you all check it out if the summary sounds interesting! I’d compare it to The Star-Touched Queen, so if you liked that, CHECK THIS OUT!

In a star system dominated by the brutal Vathek empire, eighteen-year-old Amani is a dreamer. She dreams of what life was like before the occupation; she dreams of writing poetry like the old-world poems she adores; she dreams of receiving a sign from Dihya that one day, she, too, will have adventure, and travel beyond her isolated moon.

But when adventure comes for Amani, it is not what she expects: she is kidnapped by the regime and taken in secret to the royal palace, where she discovers that she is nearly identical to the cruel half-Vathek Princess Maram. The princess is so hated by her conquered people that she requires a body double, someone to appear in public as Maram, ready to die in her place.

As Amani is forced into her new role, she can’t help but enjoy the palace’s beauty—and her time with the princess’ fiancé, Idris. But the glitter of the royal court belies a world of violence and fear. If Amani ever wishes to see her family again, she must play the princess to perfection…because one wrong move could lead to her death. 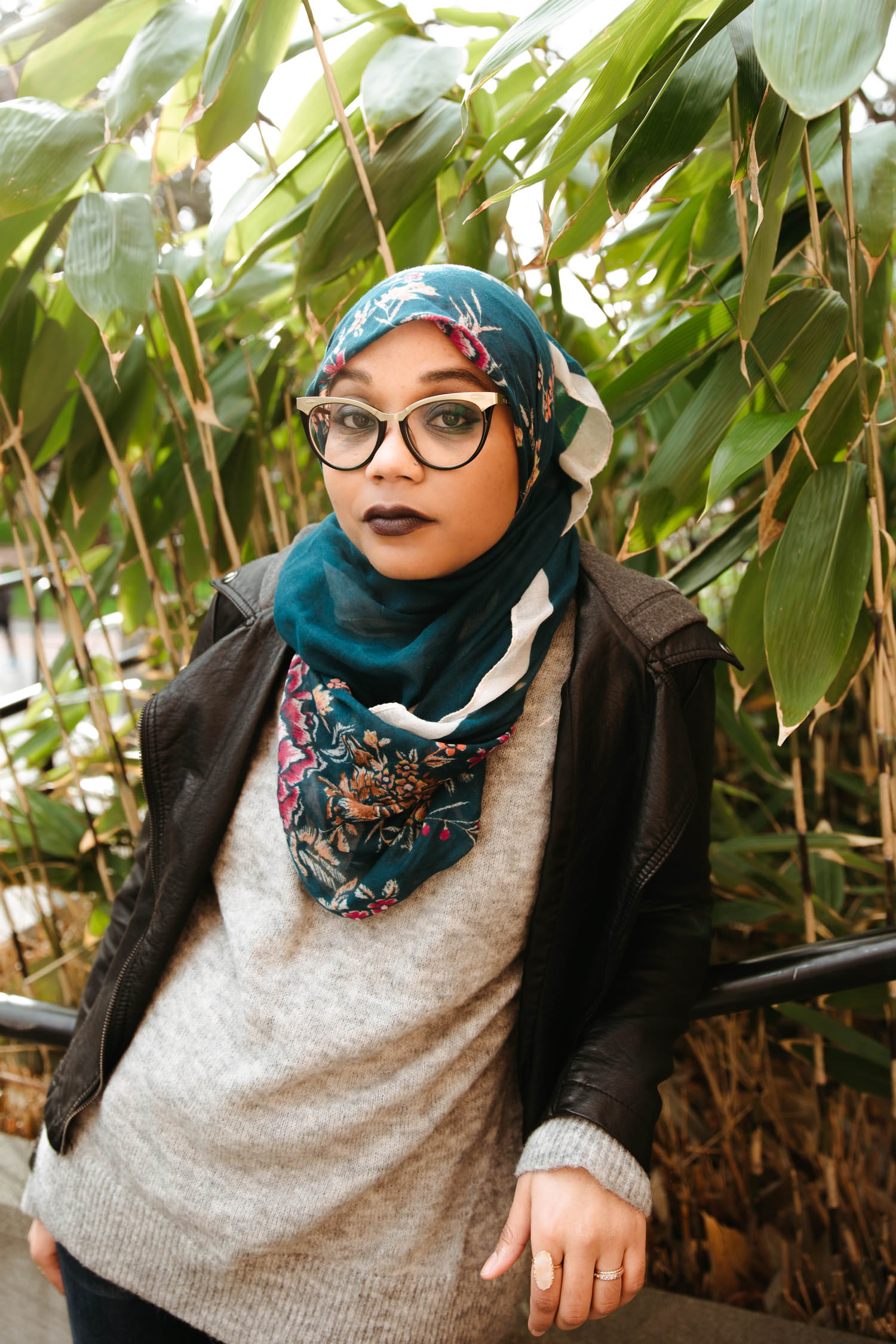 Somaiya Daud was born in a Midwestern city, and spent a large part of her childhood and adolescence moving around. Like most writers, she started when she was young and never really stopped. Her love of all things books propelled her to get a degree in English literature (specializing in the medieval and early modern), and while she worked on her Master’s degree she doubled as a bookseller at Politics and Prose in their children’s department. Determined to remain in school for as long as possible, she packed her bags in 2014 and moved the west coast to pursue a doctoral degree in English literature. Now she’s preparing to write a dissertation on Victorians, rocks, race, and the environment. Mirage is her debut, and is due from Flatiron Books in 8/28/2018.

Want to try your luck at winning a copy of Mirage? Then check out the Rafflecopter button below where one lucky winner will receive a copy of Mirage! (US only!) Or, you can use the buy links in the “More About The Book” section to guarantee yourself a copy!

Are you excited for Mirage? Does it sound appealing to you? (If so, then I definitely suggest picking it up!)