A lot of you have probably heard about those books the bookish community blows up about–books with harmful representation of minorities.

It’s happened on countless occasions–for different racial minorities as well as disabilities and LGBTQ+ rep and almost every minority under the sun. Harmful rep sucks and we want writers to write books that represent readers–but also isn’t resorting to bad stereotypes.

This is why #OwnVoices (in both authors & reviewers & beta readers) is really important, although it does NOT mean authors can’t write harmful things.

So, I wanted to talk about a few things for you aspiring authors to avoid when crafting your wonderfully diverse WIPs! Because we readers want you to bring awesome, diverse books into the world. Just not at the harm of the minorities you’re writing about.

I think it’s especially hard for science-fiction and fantasy novels to describe race vs. contemporaries who can just flat out say it, while in SFF, you might not be able to say “Asian.” 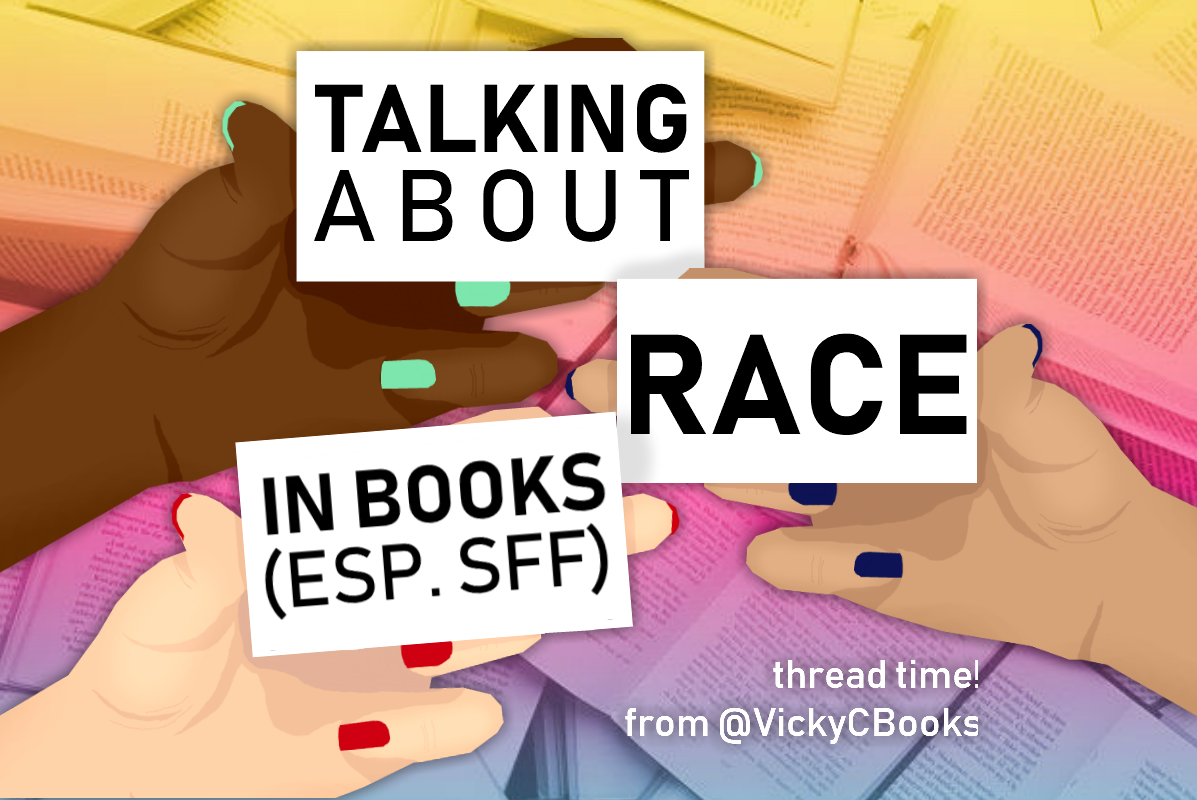 I’ll add the link here when it’s available so y’all can check it out!

Because I am not part of other minorities besides racial, I do feel like I am not the best person to talk about positive rep for those groups, so this post will focus primarily on racial rep. But, that doesn’t mean the advice can’t apply.

So, without further ado, here are some things that you SHOULDN’T do when trying to describe race in novels:

5. Do NOT forget to do your research.

Even if you’re part of the minority group you’re writing about, it wouldn’t hurt to fact check a few things. Or talk to other people. Or get beta/sensitivity readers.

This plays into #1 a bit, but research is key, though especially if you’re not part of a certain minority. Some people find certain descriptors offensive, even if you don’t.

So be aware and get a second opinion. Consult the internet. There’s a whole plethora of resources out there for you to use.

4. Do NOT approach other minorities as ‘less human.’

I can’t believe I’m saying this, but even if you’re a closet racist, your racism is gonna show through unless you ditch your mindset when you write.

The only way to write about race without coming off as racist is to not be a racist.

So basically don’t be racist, and you’ll be much better off. End of story.

3. Do NOT exoticize minorities.

Exoticizing minorities is bad. Don’t do it.

Why? Not only does it turn minority groups into “an experience,” it also can lead to fetishizing minorities etc. which leads to things like targeted harassment. No bueno.

It’s a long stretch, but it’s the little things that contribute to the culture of exoticizing minorities, and it’s just another way you can draw the line between “us” and “them.” It’s isolating and the act as a whole can lead to dire consequences.

So, in your writing, try not to describe race with food comparisons (i.e. almond eyes which also makes no sense because everyone’s eyes look like almonds?) because that’s one way this commonly happens. Another way would be putting minorities on a pedestal because that can also be really harmful (especially when only certain subsets of that minority are idolized.)

2. Do NOT use harmful stereotypes.

Don’t rely on harmful stereotypes to show race. It’s not helpful and it counteracts every good think you’re trying to do by making your book more diverse. Diversity in popular culture leads to more acceptance of diversity in real life.

So if the diversity in your novels is all dependent on harmful stereotypes of people that don’t do anything in normalizing that minority, then you’re just working backwards. These stereotypes don’t help anyone and they might be an easy way to suggest race, but they’re also a harmful one.

1. Do NOT take one experience or opinion to be representative of many.

This applies in a couple of ways.

But, what I’m really trying to get out here is some choices that one person in a minority makes may not reflect what other people make. For example, some black people use the n-word. Others do not. It’s their choice. If one black person says it’s okay for you (as a non-black person) to use the n-word and the other one says you shouldn’t, then please be safe rather than sorry and just don’t use it.

My point is that even though one person of a minority says something is okay, doesn’t mean outsiders should necessarily take it as law. Take everything with a grain of salt and if you have an inkling that you shouldn’t do it, then just don’t do it.

What tips would you give to writers trying to write POC (& other minorities) accurately?