Ohhh yeah. This is it, kids.

I love listening to Broadway musicals (I’ve never gotten the chance to watch one, on tour or in NYC) and the thing I really like about their soundtracks is how cohesive a lot of them are. You hear the same motifs over and over, the same melodies blending together, and you can understand the musical’s story from listening to the soundtrack.

Some soundtracks you can understand the whole story without hearing the in-between acting, while other soundtracks you might need a little help from Wikipedia or Genius Lyrics.

But either way, I love Broadway musicals. I also love books, because although they tell stories in a different way, they still have a lot of similarities–themes throughout, etc. .

So, today I’ll be recommending books based on Broadway musicals, but this can work both ways! If you haven’t heard the soundtrack–listen to it! You might just find a new favorite song (or a brand new passion).

Without further ado, here they are! 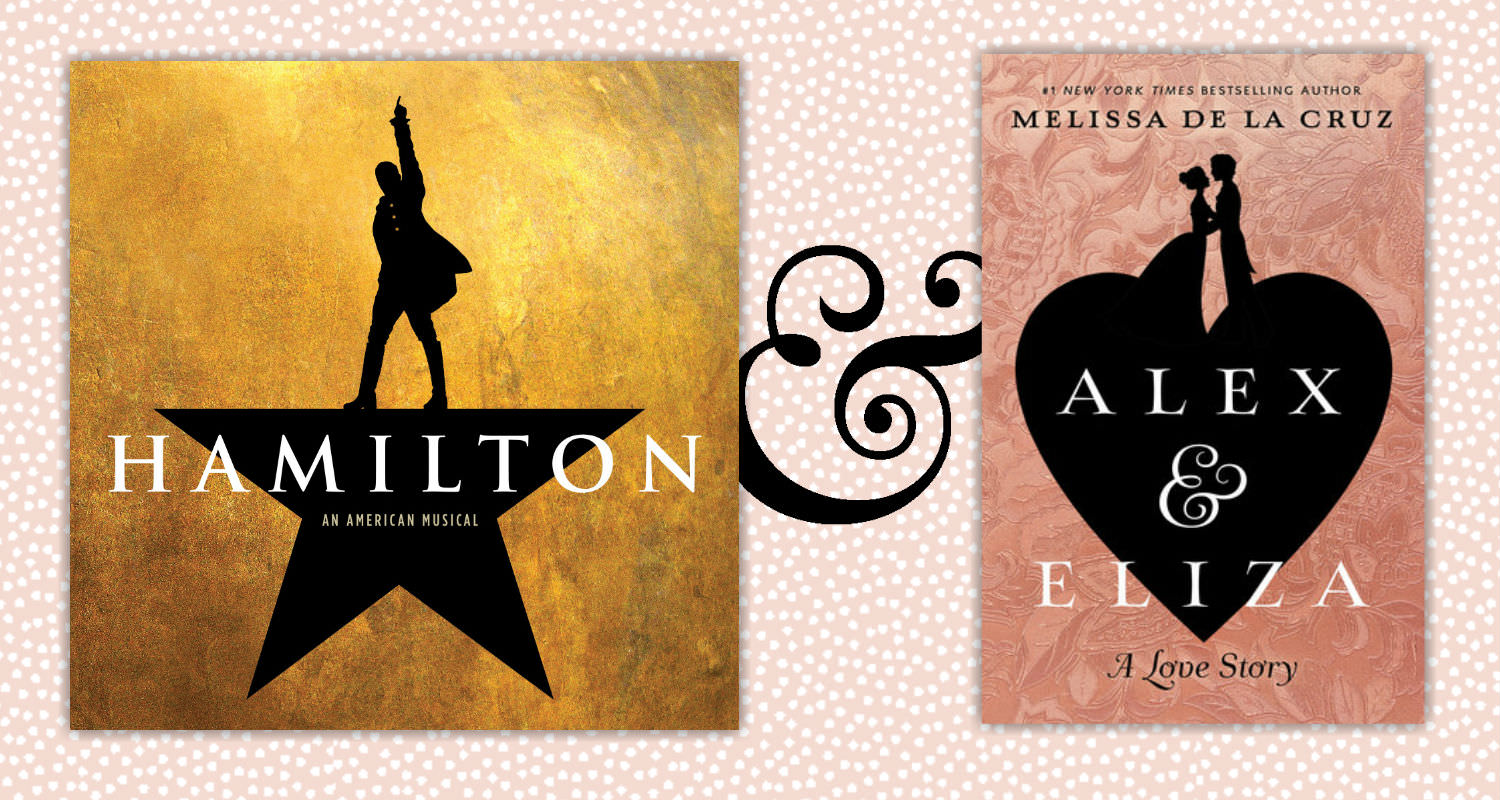 My entire Broadway obsession started with, of course, Hamilton.

It is definitely very un-Broadway–it’s got a lot of hip hop and rap in it–but it’s still SO SO AMAZING.

And my book rec that matches is none other than Melissa de la Cruz’s Alex and Eliza! Besides both of these sharing that wonderful falling in love between the legendary Alexander Hamilton and Eliza Schuyler (see: Helpless), they also excel in showing the eighteenth century off really nicely.

I found the historical context in both the musical and de la Cruz’ book to be wonderful, and it’s like you’re transported in the smack dab middle of the American Revolution (see: Yorktown (The World Turned Upside Down)).

Alex and Eliza was definitely surprising for me because I wasn’t expecting to love it as much as I did when I already knew so much about their relationship. If you’re a diehard Hamilton fan, it doesn’t hurt to check this book out!

note: Alex and Eliza is not affiliated with Hamilton or any commissioned work. 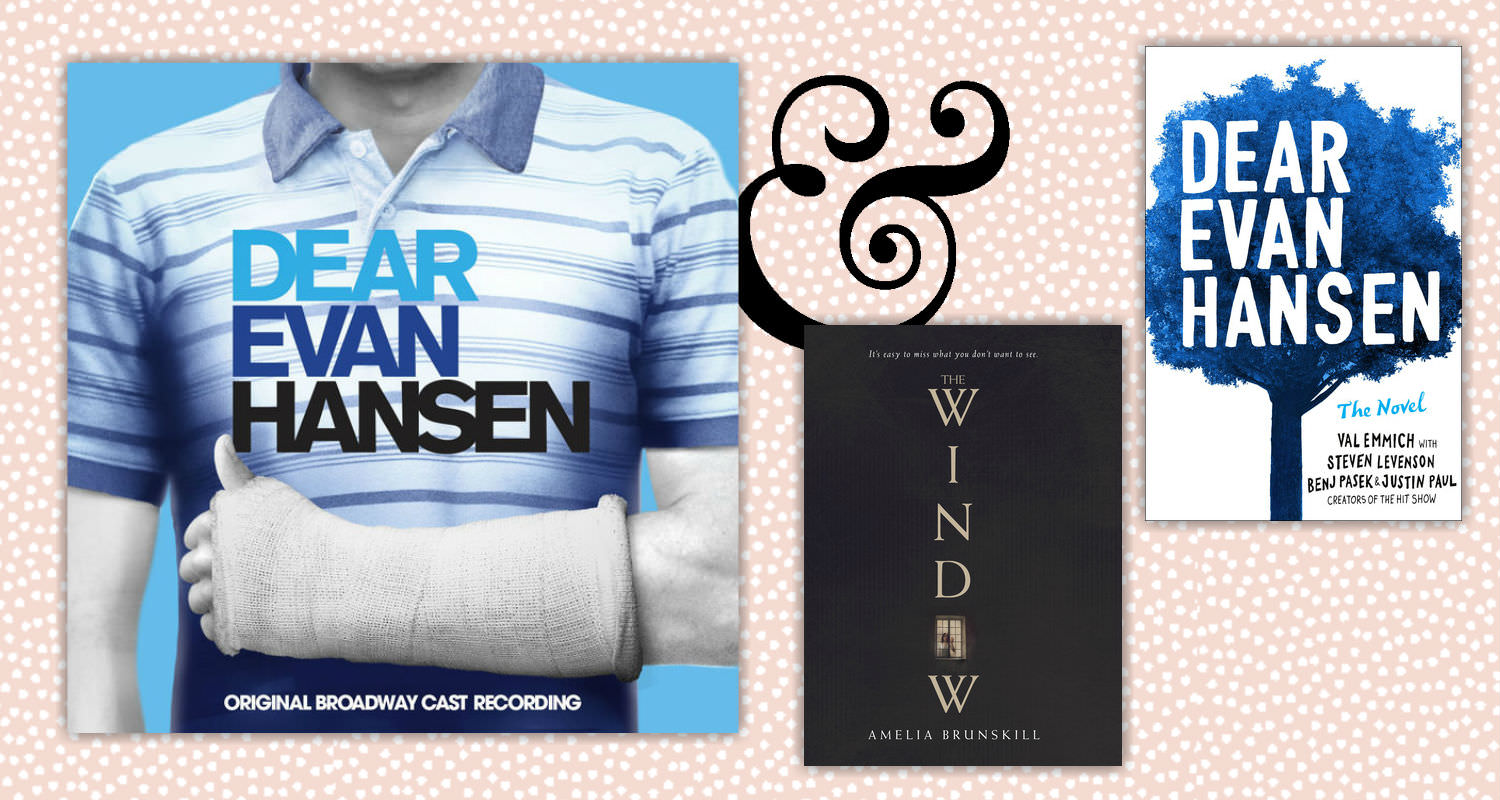 I have to include the very obvious Dear Evan Hansen: The Novel by Val Emmich et al. because who isn’t excited to read the wonderful musical Dear Evan Hansen in book format?!

Seriously, this musical would make such an amazing YA novel, especially with all the themes on mental health and coming of age. So Dear Evan Hansen: The Novel was a had-to-include for me, just because.

But also, there’s this one song in Dear Evan Hansen called Waving through the Window (so good!!!) that always reminds me of Amelia Brunskill’s mystery novel, The Window. They both have that sort of sad-ish sort of mood and that reaching, you’re-drowning-in-life sort of feel.

The Window really examines how a girl deals with the murder of her twin sister, and it’s not only a mystery novel, but it also works with the main character’s growth in the novel, which is largely characterized by that feeling I described that you hear in Waving through the Window.

So yeah, listen & read to all of these awesome pieces of popular culture!!! 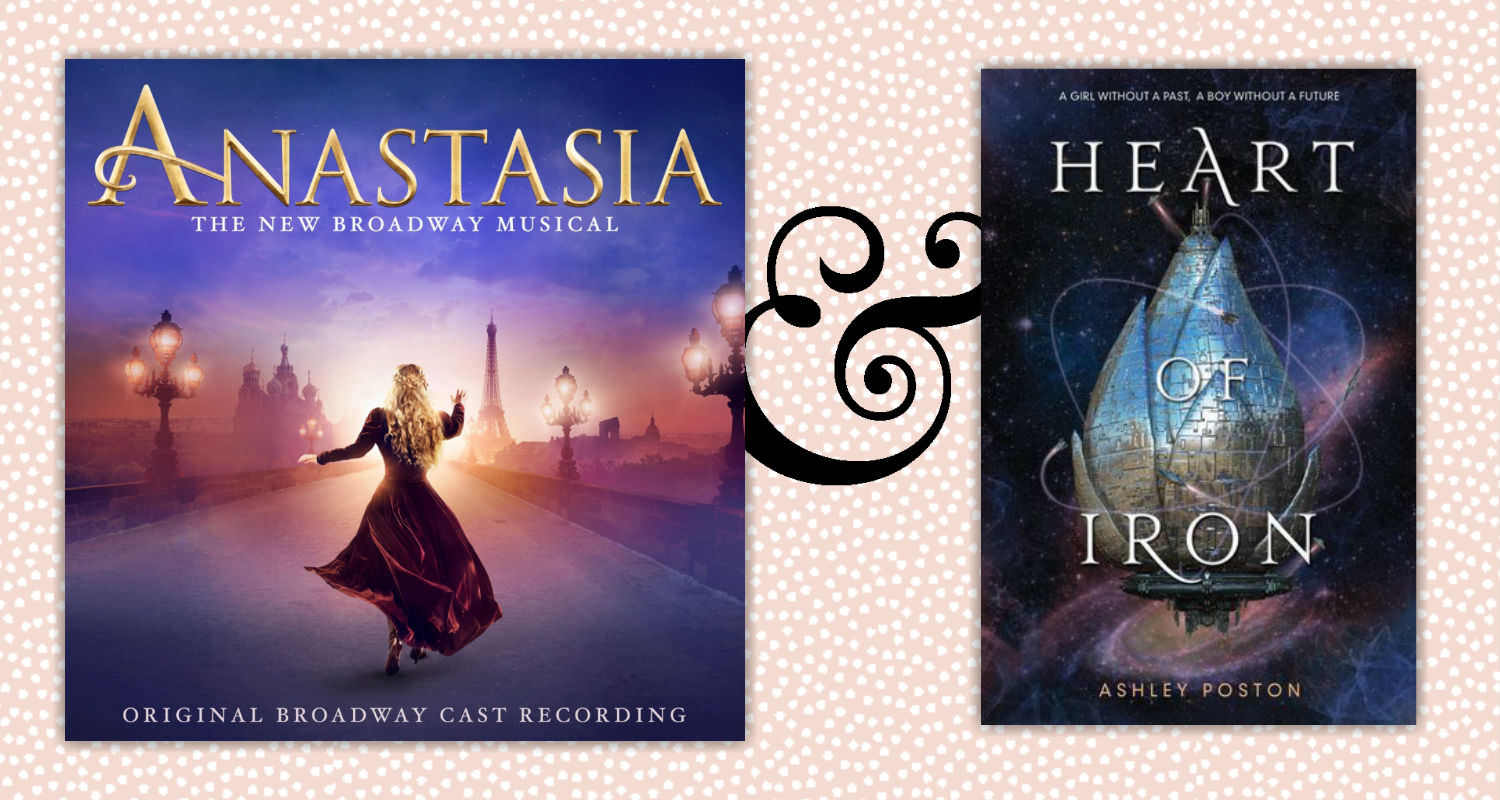 Is this one not obvious?

Because besides Heart of Iron being an Anastasia retelling, there’s just a lot of similar feels in both the Anastasia Broadway musical and the novel.

Yes, please nod along with me as we realize there’s MORE SIMILARITIES BESIDES JUST THE LONG LOST PRINCESS PREMISE. Hot damn, Ashley Poston.

So yeah. Plus, songs like Still are great mood music for Heart of Iron. Honestly this entire soundtrack is awesome so like, go listen to it and also read Heart of Iron if you haven’t already? 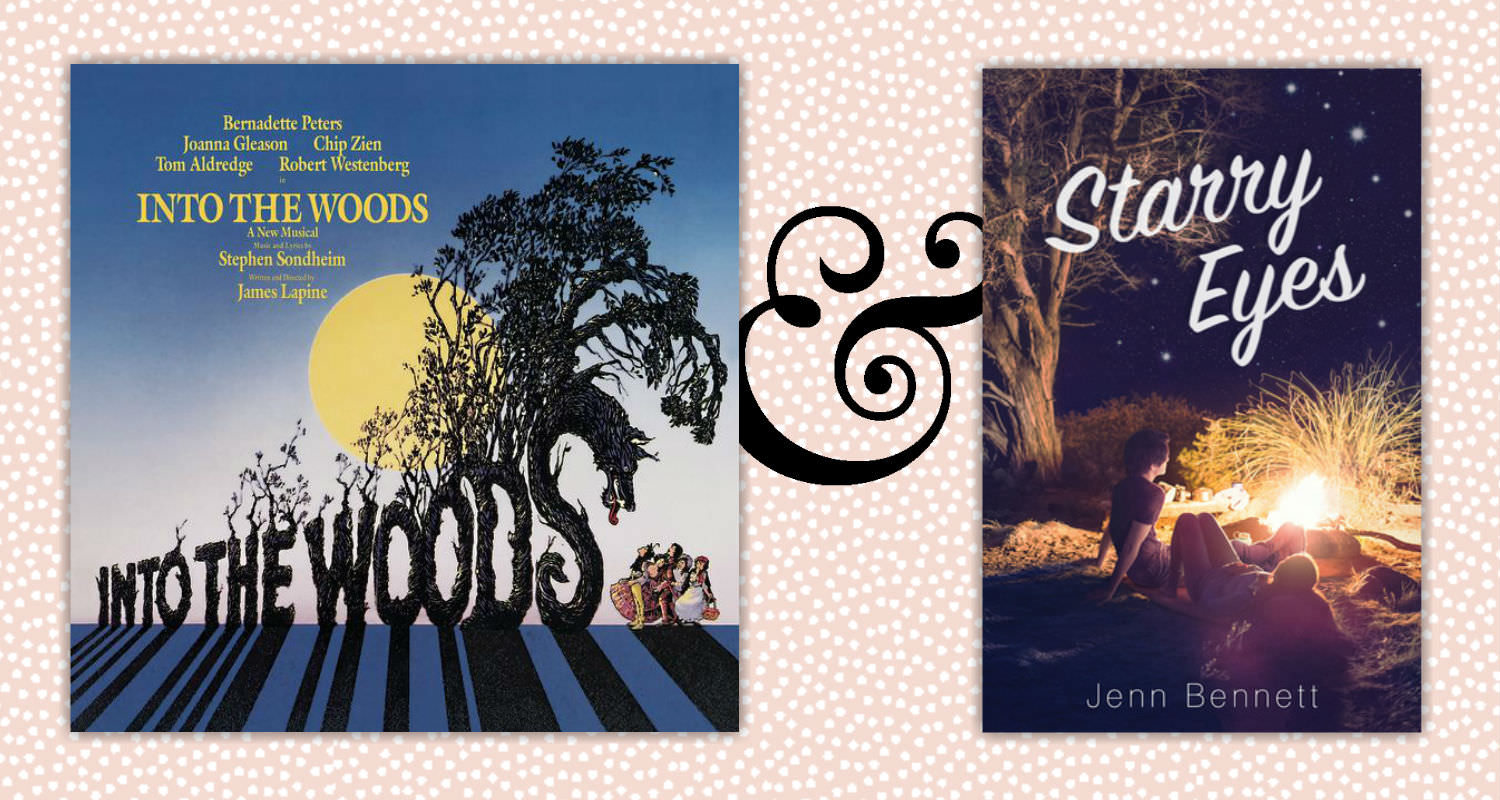 Into the Woods + Starry Eyes by Jenn Bennett

This is probably my favorite comparison of this entire list.

Into the Woods, if you’ve seen the movie that’s based off of the Broadway musical, talks a lot about how different things seem in the woods–how people act differently and everything appears different and more magical and the woods kind of exist outside of reality.

And Starry Eyes by Jenn Bennett is about two teens who have a past together getting lost in the woods when going glamping (glamour camping) with their friends. And guess what? Things are different in the woods.

In It Takes Two of Us from the musical, a scene where the baker and his wife are talking, the baker’s wife says “You’re different in the woods,” and this phrase could not be any more related to Starry Eyes.

Things are different in the woods, both in Jenn Bennett’s Starry Eyes and in the musical Into the Woods. I totally recommend both, if not just for the swoony romance and a witch yelling “Greens, greens!” 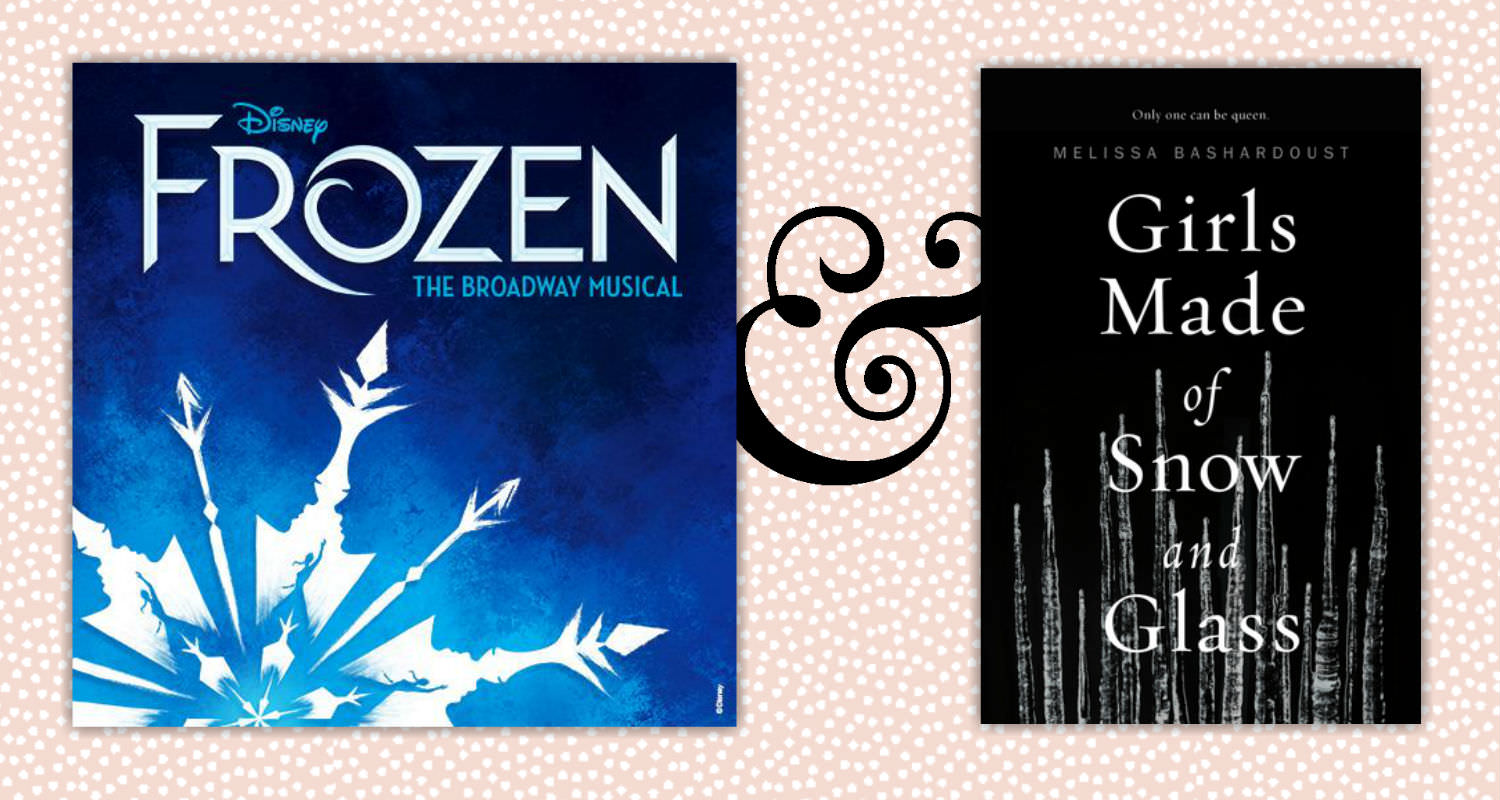 Frozen + Girls Made of Snow and Glass by Melissa Bashardoust

Alright, I admit that I haven’t actually listened to the Frozen Broadway soundtrack yet.

But I do have friends who have listened to it (it’s on my TBL I swear) and I’ve obviously watched the movie, so I have a pretty good basis to make this comparison.

The stepmother in Girls Made of Snow and Glass is basically Elsa. Basically. Besides both having mad icy powers, there’s also that just pain that they both have to carry on their shoulders to live up to certain expectations, and it’s the main reason why I made this comparison. Mina just goes through so much in this novel, and I feel like her struggle really relates to Elsa’s.

Also, these both have top notch atmospheric similarities with the snow and the glass and the chilly things. Such a good book though, and I definitely recommend you check this out! Also, people have said the Broadway soundtrack is even better than the movie’s, so 😉 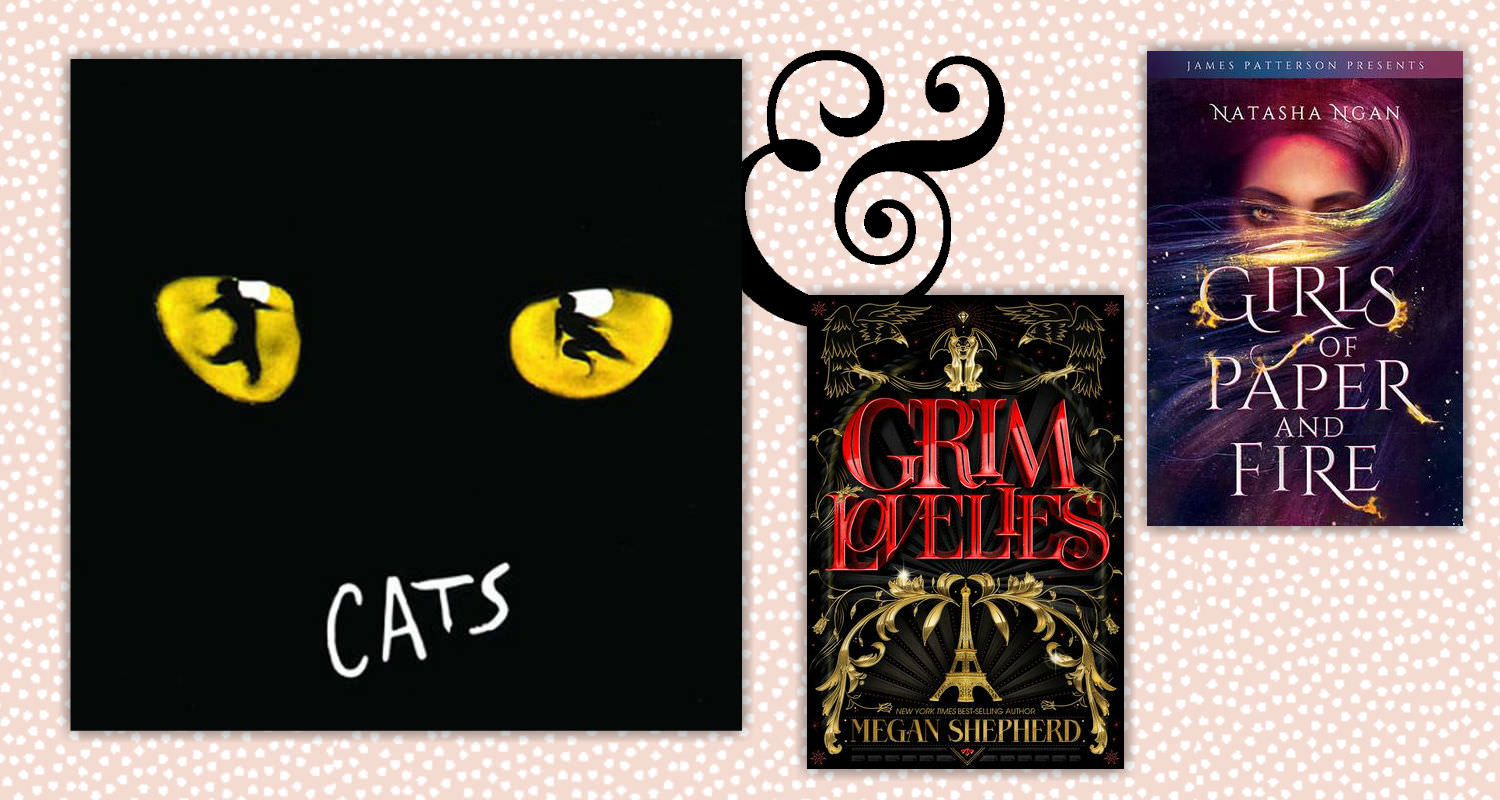 Ok, you’re probably like “Ew, Vicky–you like Cats?” and I PROMISE I’M NOT A CATS PERSON; CATS IS WEIRD OK?

Cats really is weird and I watched a filmed production of it once when I was younger and now I have never had any sort of inkling to think about this musical again. (Also, this is my preemptive “I DON’T UNDERSTAND CATS & DON’T REALLY SUGGEST YOU LISTEN TO IT” warning.)

But, Grim Lovelies and Girls of Paper and Fire both remind me of Cats, but they’re like, better, okay?

Cats reminds me of people dressed up like cats for no apparent reason (remember, I watched it when I was like 10 so I really didn’t get it). And Grim Lovelies and Girls of Paper and Fire both feature animal/demon people, which I find very cool.

So, if you’re looking for something with animal/demon fantasy people (sort of like the chimera in Daughter of Smoke and Bone), I definitely recommend you check both of these books out! The jury’s still out on Cats, though.

They’re like the actors and actresses in Cats, but less scarring. 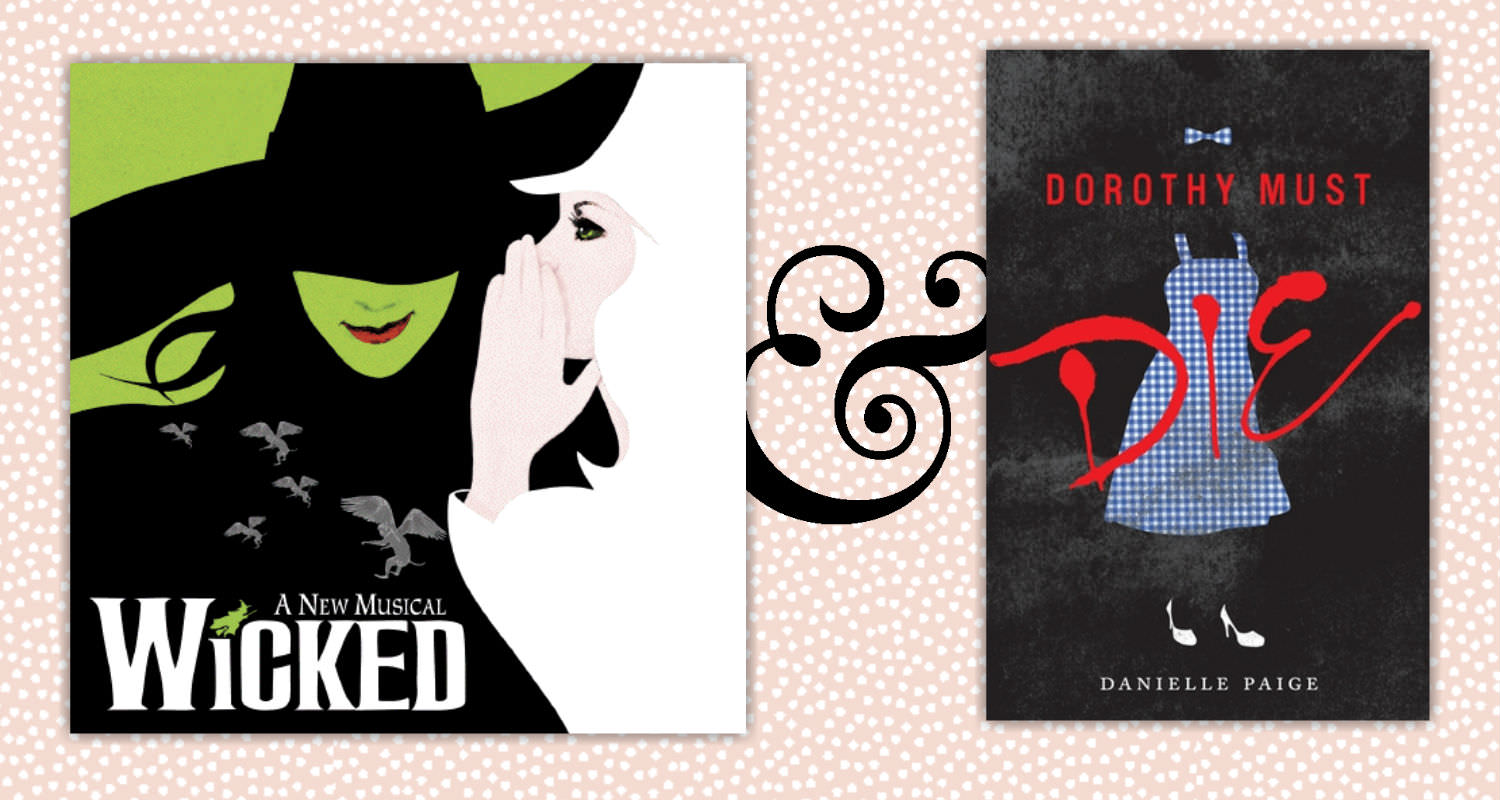 Of course, Wicked has just gotta be on this list somewhere, right?

Wicked is a little mainstream for me (you: don’t you listen to Hamilton, Vicky? me: …yes.) and it was so Popular (hehe, catch my reference?) that I just don’t listen to it that much.

But WHO DOESN’T LIKE TWISTY THE WIZARD OF OZ RETELLINGS?

In Dorothy Must Die, Dorothy is obviously the bad one. And in Wicked, Elphaba is the heroine, although she has her bad patches from time to time. Both of these novels twist the original story in an inventive and creative way, but still keep the loveable parts of the novel.

I definitely recommend you listen to Wicked if you haven’t already (it’s a great start to getting into Broadway) and also Dorothy Must Die for it’s dark nature and twisted storyline. 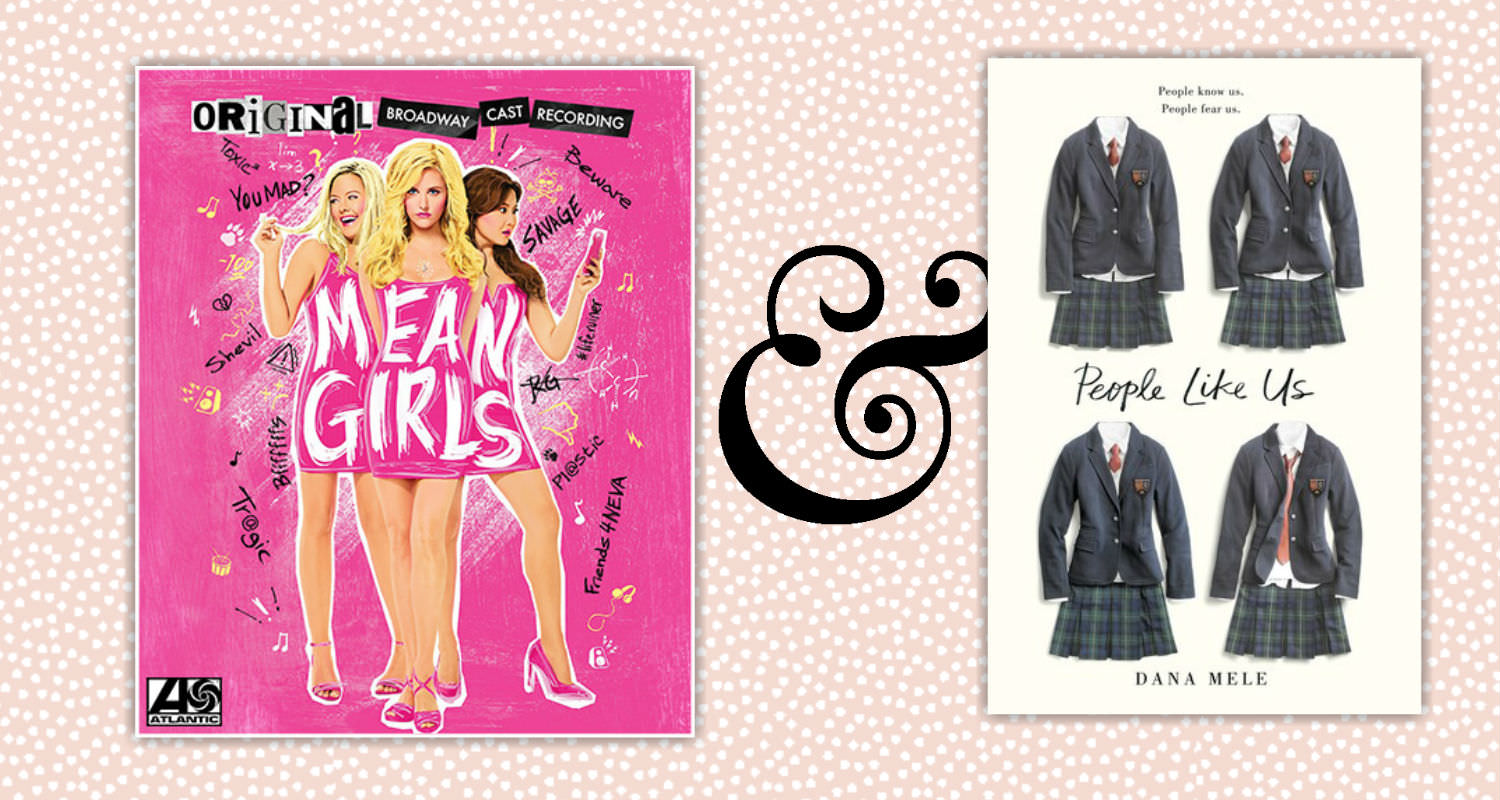 Eep! Mean Girls on Broadway is my latest obsession, and it has not been disappointing in the 2449398390 times I’ve listened to it!

It’s a lot like the movie, just with sassier characters and better music and acting. Also, singing and dancing and cake (which is a line from Revenge Party). And People Like Us by Dana Mele is basically a Sapphic Mean Girls boarding school murder mystery.

Can a get a woot woot?

If you’re looking for some mean girls who are a little confused about vests (see: Fearless) and life, then definitely check out both of these for awesome music and mean girls and boarding school murders. People Like Us will not disappoint with its twisty nature, just like Regina’s plots with Aaron.

What Broadway musicals that I didn’t list here would you recommend + matching books? Let me know which ones you love in the comments below!

24 thoughts on “Book Recs Based Off Of Broadway Musicals!”