A couple weeks ago, I came across a conundrum.

I had read a book, and there were people of color featured in it, but it felt unequivocally white. There were some characters of color, but they were trussed up in medieval style clothing and medieval culture with lords and ladies and princes, princesses, too-tight corsets, and a medieval style gender system too.

What makes a book qualify as diverse? (In this post I’ll mostly be referring to skin color, but that doesn’t mean things like LGBTQIA+ rep & disability rep don’t count.)

If we strip away people down to skin color and add them into the medieval world, is that diversity?

The answer for most authors is probably so teens can see themselves represented in writing and so they can feel like their voices are being heard. So we, teens who aren’t cis/het/white, can see ourselves as the heroes in novels, not just the villains or side characters.

And so, what happens when you find yourself stripped down and only portrayed in skin color, but not culture? Obviously, this is a problem more prevalent in science fiction and fantasy, and I think it boils down to inclusivity vs. preserving culture.

Because on one hand, the argument could be that we, as POC, want to see ourselves included doing normal things–like the concept of black joy and how black people can star in romances too, not all their stories have to be about pain.

But on the other hand, by completely ignoring the background of whatever minority group you’re writing about and focusing on one aspect of what makes them “different,” you’re also erasing part of this group’s history.

I honestly have no idea where to draw the line between diverse and non-diverse. For me, this is something that varies on a case by case basis.

But with this specific example, I feel like by making some characters people of color in a medieval, prevalently white, & oppressive-towards-women society and barely talking about how skin color affects perception, you’re making “diverse” characters without actually wanting to talk about how they’re diverse.

In this case, it feels like the author is using a cop-out–adding characters of color so they’re not called out for only writing about white people, but not talking about the other aspects of that minority’s culture.

Finding the balance between an inclusive novel where it’s normal to see POC and also representing the minority in a way that teens can relate is really what I think this boils down to.

I don’t think it’s enough to just stick people with darker skin in a predominantly white medieval fantasy world. I don’t think this is enough to make someone feel represented. I think there needs to be some element that someone can relate to, besides the fact that “Oh, they have almond shaped eyes too!”

For me, this means worlds that aren’t based on medieval times in Europe. It means not just having all the ladies wear corsets–but some wearing saris or a quipao or something that doesn’t have a history of white dominance in it. It means a truly diverse setting–one that’s based off of a part of the world that isn’t white.

I want to see my culture represented, not just my skin color.

I leave you with a meme: 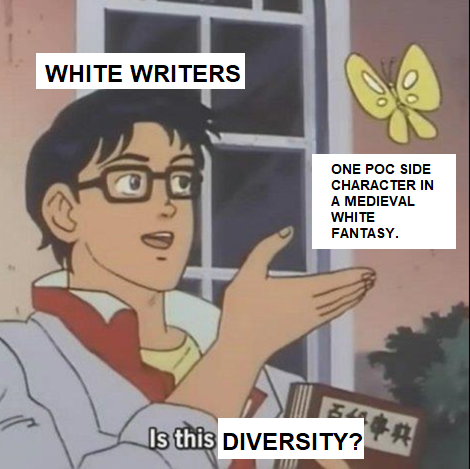 I feel like this is a really big topic and definitely varies from person to person. What are your opinions on how diverse does a book need to be to qualify as diverse? Would you consider the aforementioned book as diverse?

2 thoughts on “What Qualifies as “Diverse”?”