Are you ready, baby goats (kids)? Because you better grab your blankies because hoo, do I have a story for you.

In anticipation of May the Fourth, I planned the most epic thing ever. A BRANCHING SCI-FI BOOK RECOMMENDATION TWITTER THREAD.

The way it works is it’s a more interactive recommendation tool that’s kind of like a choose your adventure story, but composed of tweets. So it starts out with one question which branches into more questions which have more questions until you end up at a result.

I spent weeks planning which books are included (I used 51 books), what categories I would divide them into, which sub categories, and so on and so forth.

I color coded, I wrote questions out, I elaborately planned every single tweet, and I made individual graphics for each of the 24 final answer choices. (The image below is just a fraction of the planning I did.) 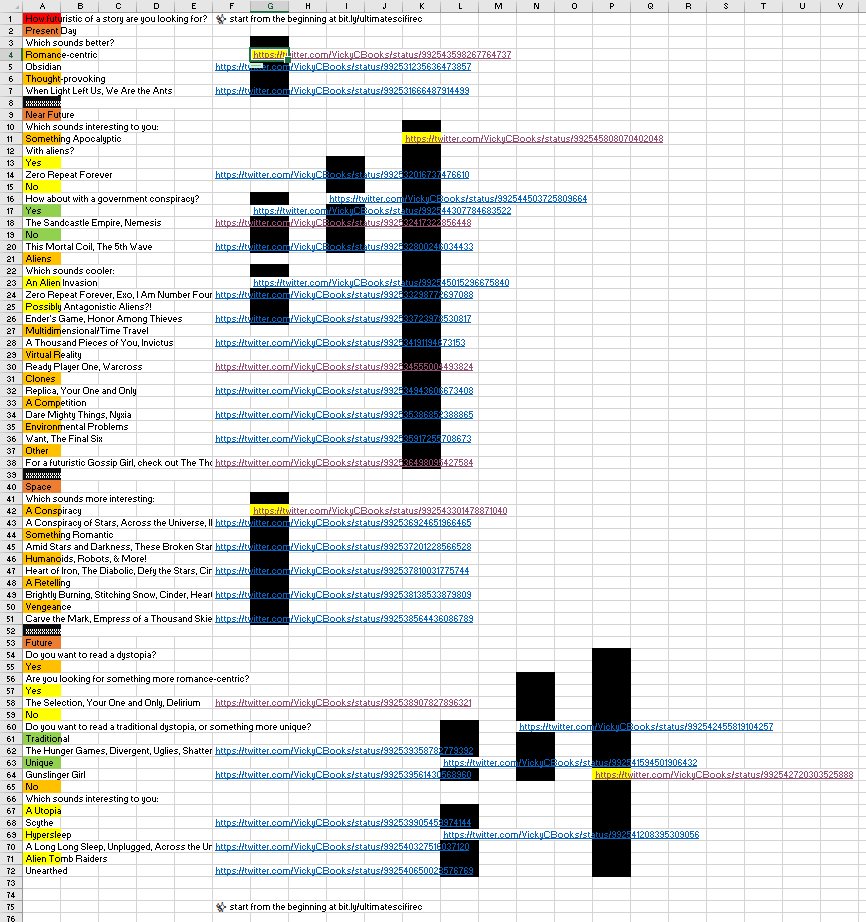 And it worked! I did it tweet by tweet, for all 34 tweets that linked to earlier tweets. It worked like a dream, except for just one, teensy tiny snag.

SOMEONE ELSE HAD CLAIMED THE BIT.LY LINK I WROTE DOWN.

At the point I started using this bit.ly extension, I didn’t actually know if it was available. But I really thought it was. I mean, it was already a bunch of letters–would anyone really make a bit.ly that long?

Apparently, yes. Yes they would.

The bit.ly was supposed to link to the starting tweet, which, incidentally, was the tweet I had to write at the end. Theoretically, I should have planned this better. I could have written a tweet before it all started and then put the thread as a reply to that tweet, but knowing this whole ordeal, I obviously wasn’t acting like the sharpest knife in the drawer.

So, when I tried to add that as the extension for the final tweet–as every single tweet before it and their graphics had the words “start from the beginning at http://bit.ly/ultimatescifirec”–bit.ly told me that THE EXTENSION WASN’T AVAILABLE TO USE.

Why does the world hate me so much? I do not know. But basically, the multi-week + four hours just today project was ruined by that one stupid bit.ly link being claimed. *bangs head against the wall*

Although it’s not technically ruined because the whole branching thread is still functional, but it’s ultimate effectiveness is ruined because the revised link is now in the comments and not on the graphic or in the tweet. So it’s harder to find the thread’s origin.

I could technically fix it by deleting all the thirty something tweets and remaking it all, but that would be a 4 hour endeavor that I am not ready for.

So, the moral of the story is:

Be smart. Don’t be Vicky.

I’m going to go and cry on my pillow for the next twelve hours now. See you tomorrow morning.

(But also, please go use my tweet recommendation thread! There are 51 possible books that you can get recommended and if you’re looking to get into sci-fi or if you already love sci-fi, you can find your next favorite read! Just go to the new, exclusive bit.ly link: http://bit.ly/ultimatesscifirecommendations!*)

* I just realized that this new bit.ly has a typo in it. It’s supposed to be ultimatescifirecommendations but apparently in my anger I typed it wrong and with two s’s. wHY DOES EVERYTHING BAD HAPPEN TO ME?!?!

Have you had a day where you just feel like the most unlucky person ever? Let me know all about it in the comments below so maybe I’ll end up crying for only 11 hours after hearing about everyone else’s misfortunes!