Welcome to my stop on the Genesis blog tour! Project Nemesis is such an awesome series and I’m here to tell you just how much I love it (aka a bunch times a billion).

This is such an epic series, but to make this post to be super friendly for those who haven’t read the first book (because oooh, real spicy things happen in book one 🔥🔥🔥), I’m leaving all the spoiler-y bits for the end. So, those who’ve already read book one can indulge in my thoughts on book 2 and everyone else can read without fear of spoilers. (But there’s no book 2 spoilers! You’ll have to find those out for yourself 😉.)

But seriously, this book series is EPIC! There’s tons of action and also romantic tension and (lots) of mystery and all sorts of conspiracy and it makes me want to gush about it all day. There’s these plot twists that make you do a triple take and it’s so intense throughout both novels.

Every other birthday since Min was eight, she’s been brutally killed by a strange man and then wakes up hours later in a clearing feeling perfectly well. This also happens to Noah, and he and Min both discover that people have been lying to him for his whole life.

Yet, the planet is threatened by an enormous asteroid, The Anvil, making Min and Noah’s problems seem insignificant. Yet, Min and Noah and the whole sophomore class at Fire Lake are part of a vast conspiracy that is more sinister than just the murders but may yield numerous possibilities.

This series just keeps building and building and it’s honestly fantastic and I never want it to stop! Conspiracy books are always difficult to write and can very easily be messed up, but I think Reichs does a fantastic job with this.

If you like one of the following, then the Project Nemesis series might just be for you!

This is just such a fantastic series, and if this hasn’t convinced you to read it, I don’t know what will! You can read my full review of Nemesis here, and scroll to the bottom for my review of Genesis (with spoilers for book 1).

Now for the fun part…

So, hopefully to convince you of just how awesome this series is, I’ve got a series of Spot-the-Difference games for you to play!

I set them in their own rows instead of side by side because hopefully that’ll let you see them better to spot those tiny details! Now, without further ado, let’s begin!

First up is everyone’s favorite heroine, Min! She’s totally badass and she’s not afraid to do what’s right. Plus, I’ve gotta stick by any Asian-American protagonists & support the fam! There are three differences between the pictures below, two that are easy to spot and one that you might not be able to see because it’s a very tiny detail.

Don’t feel bad if you can’t find them both–I tried my best to make it as tricky as possible!

(Hint: all three are part of Min, not the background.) 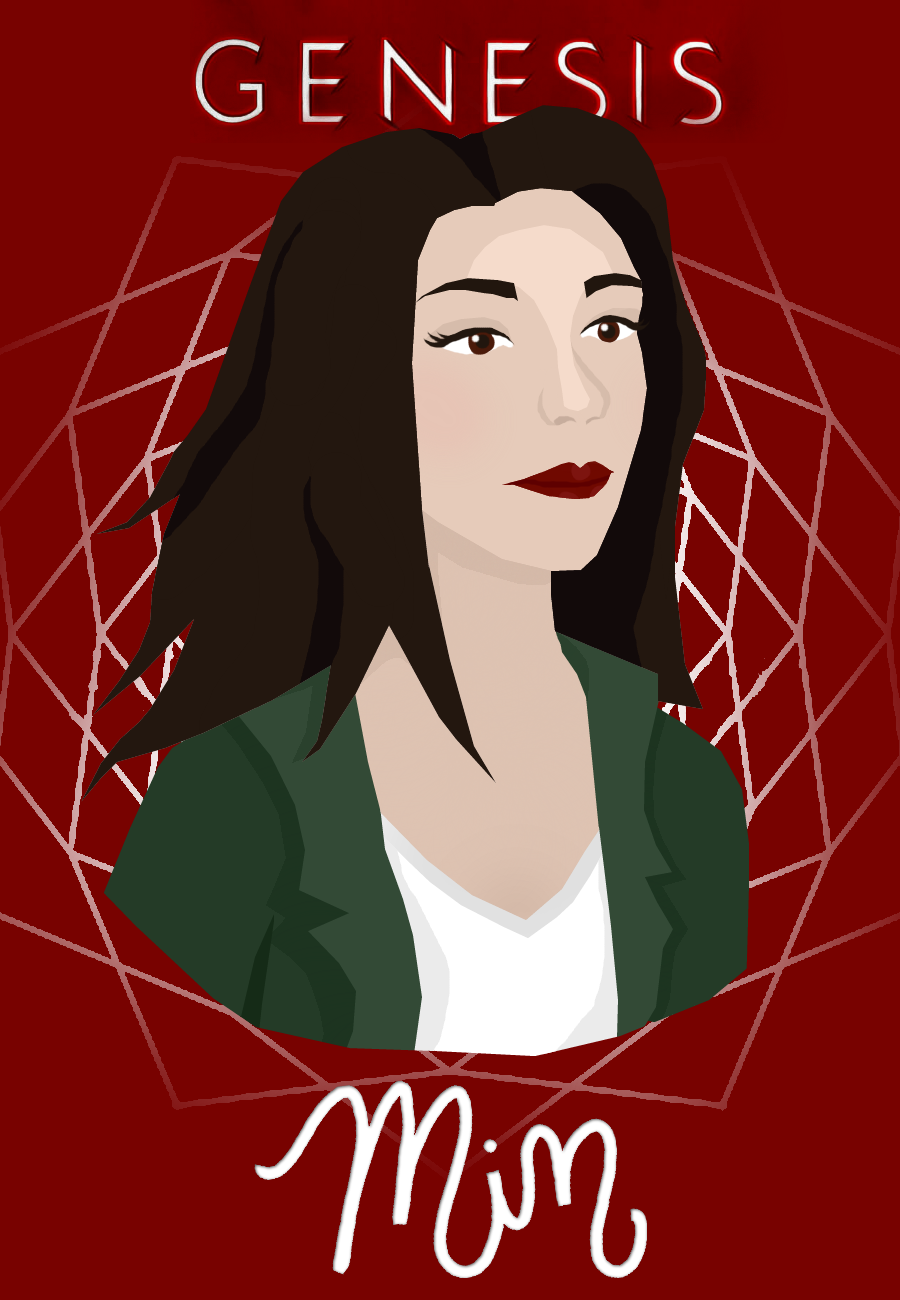 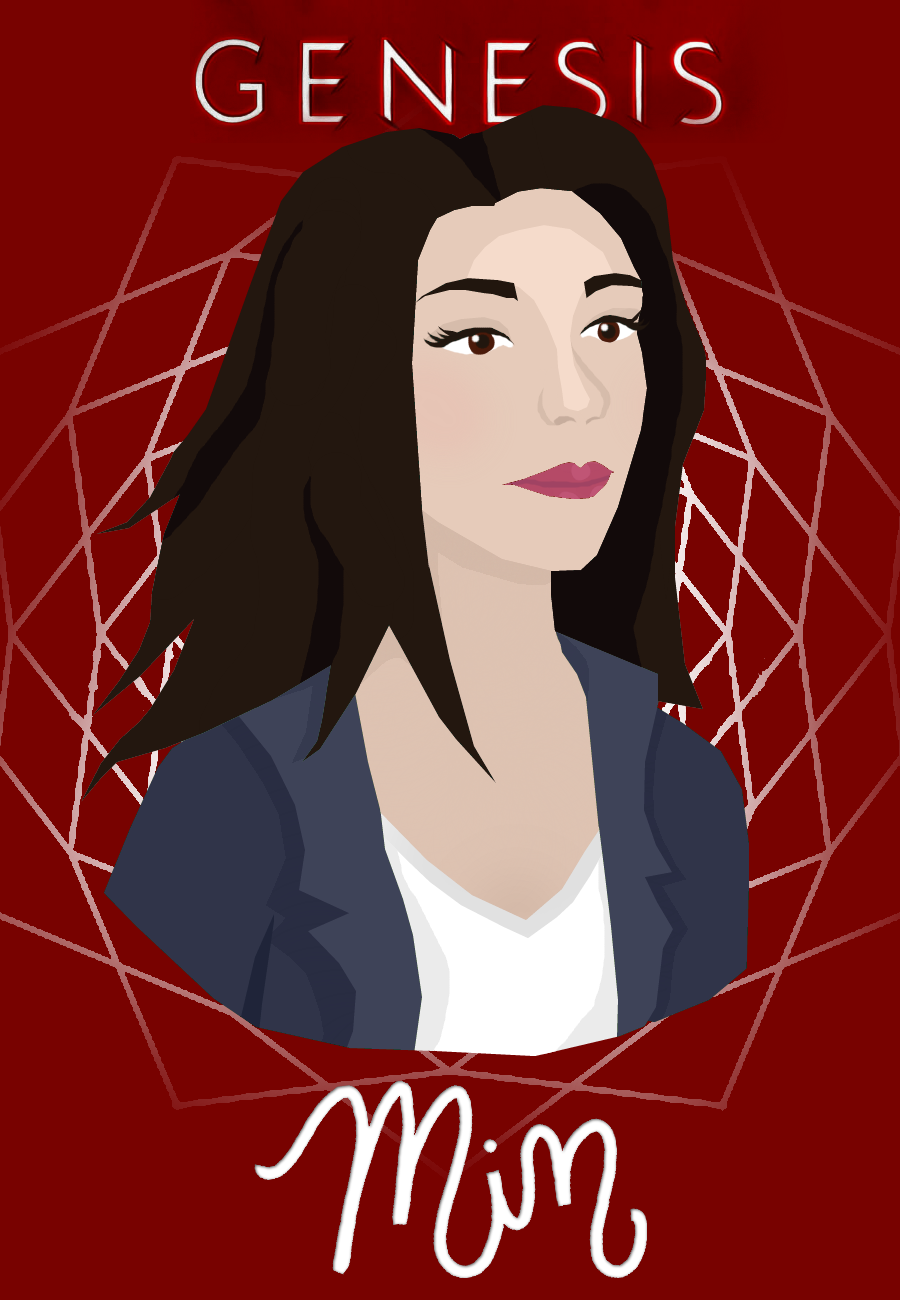 Noah is such a complex character. His character arc is my absolute favorite out of the whole series and I just love how flawed he is. In Nemesis, we read about Noah’s turn to the dark side–somewhat like Anakin Skywalker in the prequel Star Wars trilogy–and in Genesis, we see how he changes again, but this time for the better.

The conspiracy that’s happening is no joke, and Noah will be tested to see if he’s up to the challenge. There are only two differences this time (…I think), but one of them might be hard to see in technology screens that aren’t too bright!

(Hint: those dreamy eyes might just win Min over, but will they for you?) 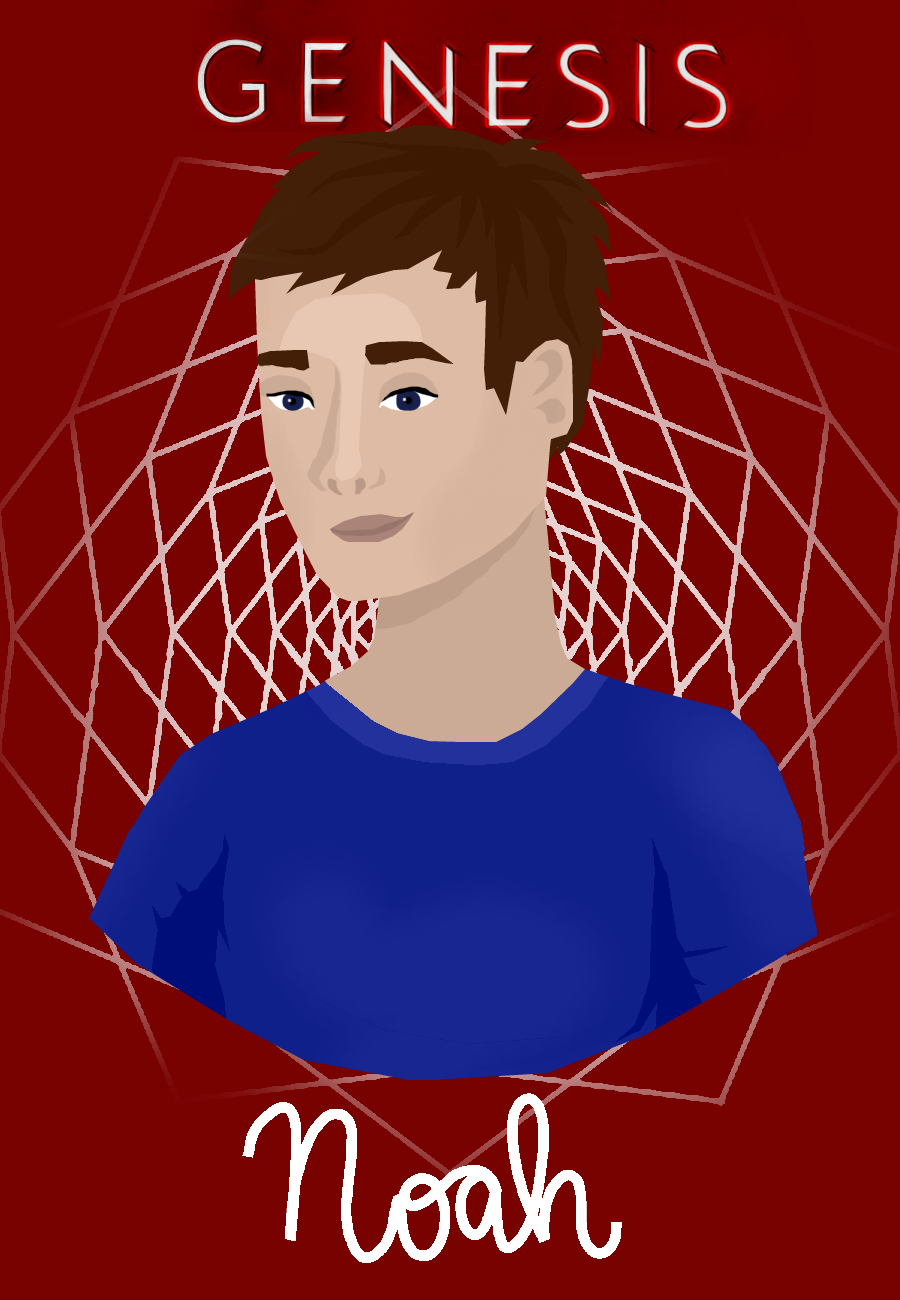 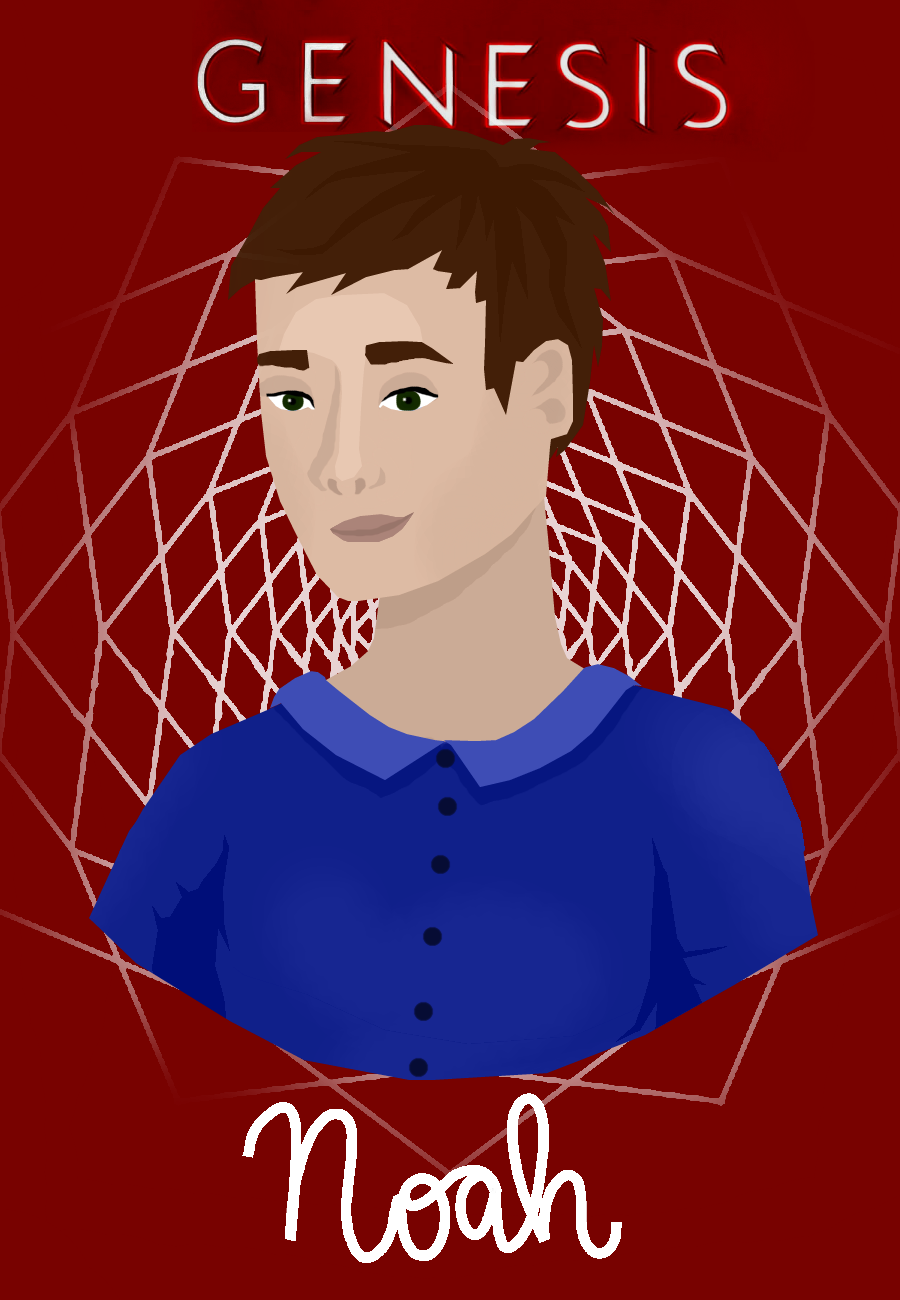 Are you feeling like you’re going to quit after the trouble makers that were the last two fan arts? Well, I can’t promise that this one is going to be easier, so y’all better make sure your glasses are on well and snug.

I stuck Nemesis and Genesis among some of my favorite science fiction and fantasy books, and then did a little editing around to get my two different photos! There are three differences in this one, and they should all be easy to spot if you (hint!) read the words. They do say a picture is a thousand words. 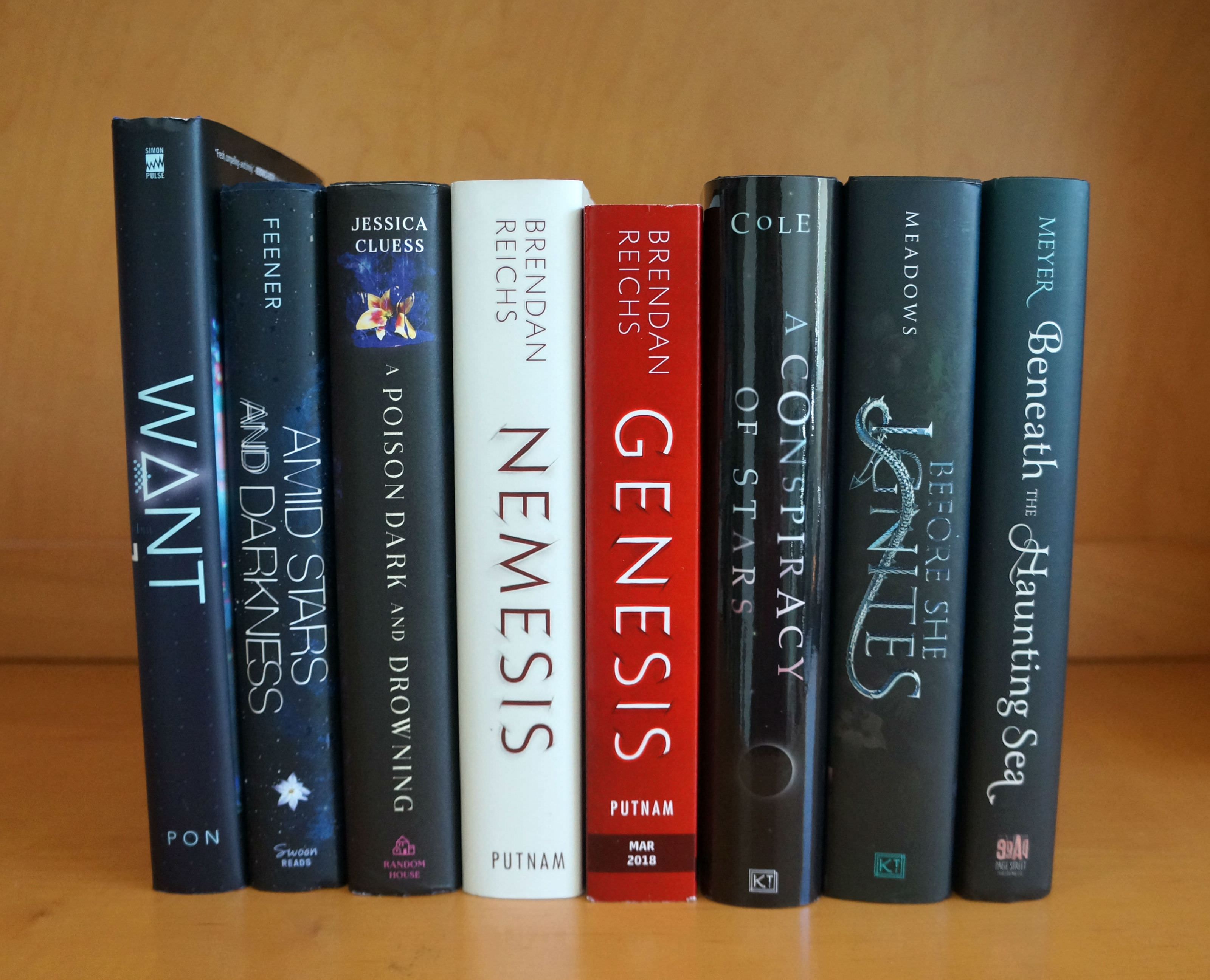 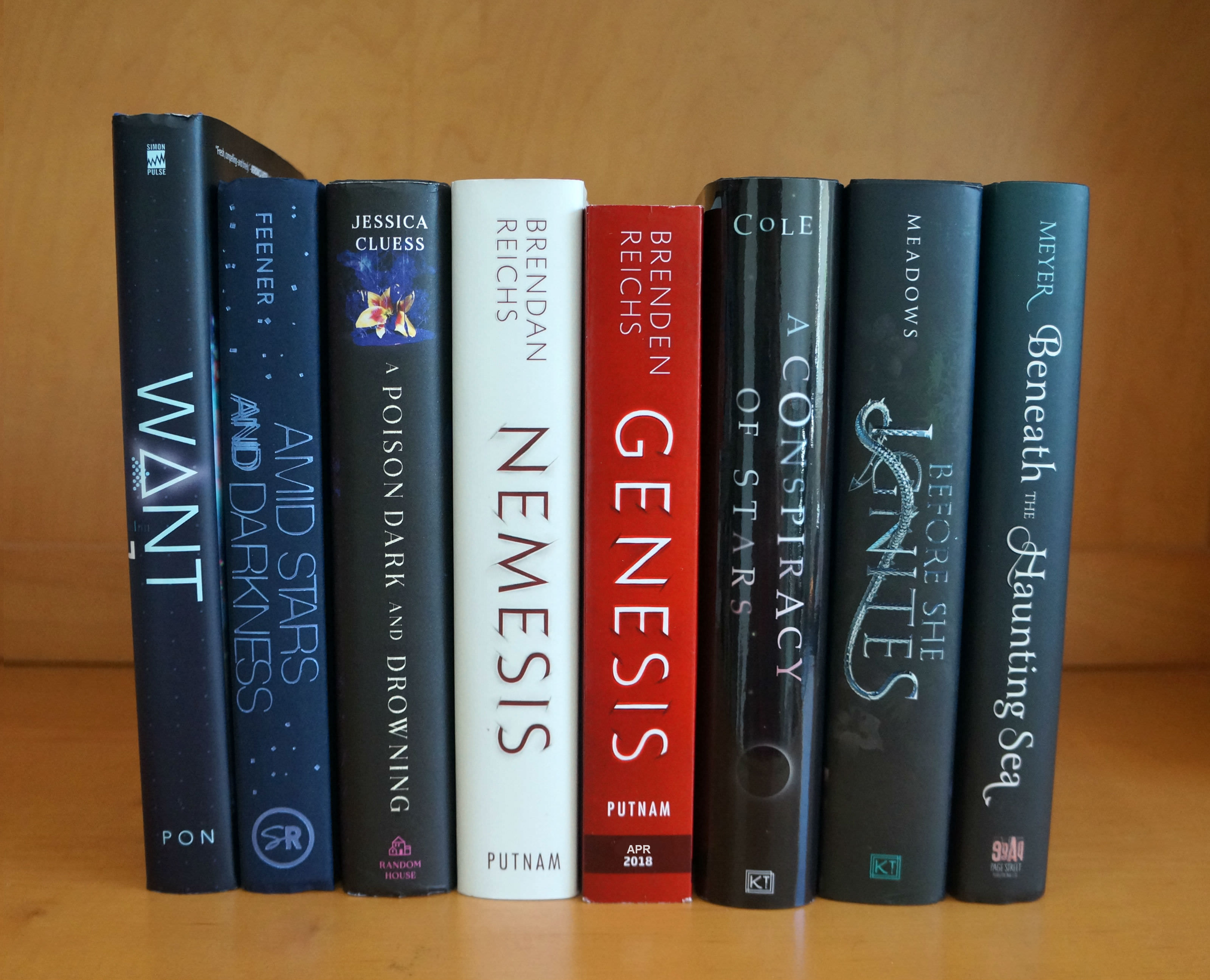 How well did you do? What was your score out of 8? You can save this graphic below and add your score on to share on social media for how well you did on the GENESIS PHOTO CHALLENGE! Don’t forget to link back here so others can play too! 😉

(Oh, yeah! Here‘s the answer key 😉. I wouldn’t leave you hanging without one!) 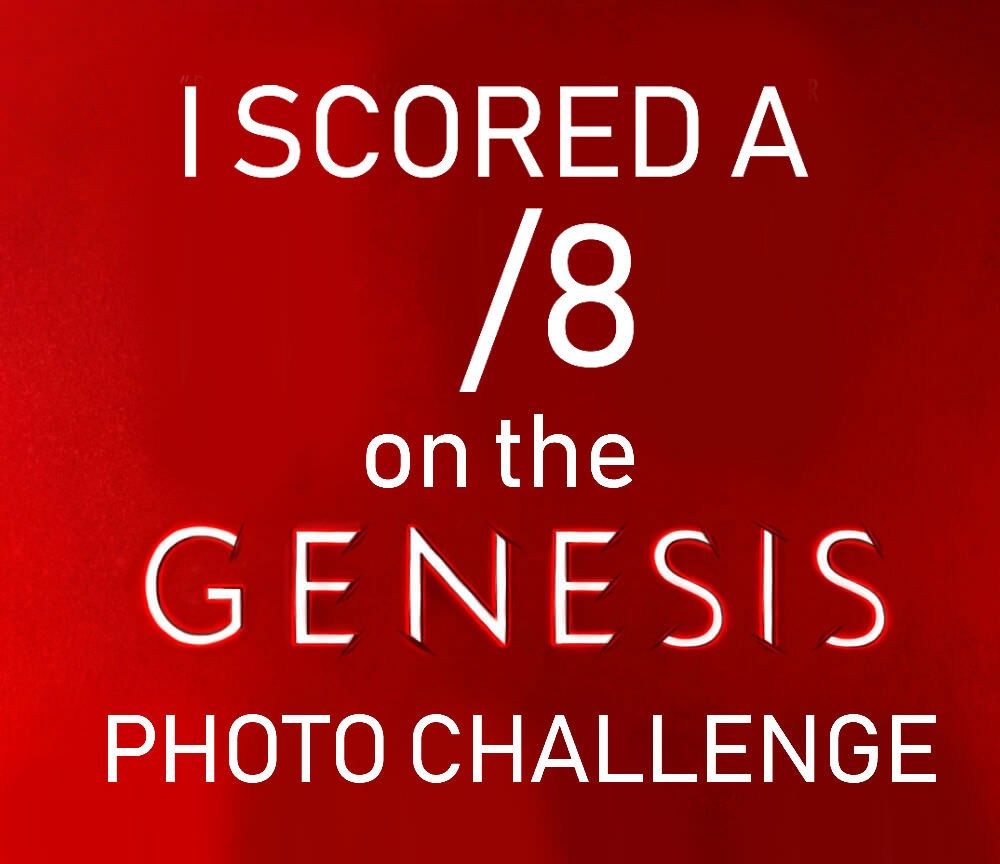 More About the Books

It’s been happening since Min was eight. Every two years, on her birthday, a strange man finds her and murders her in cold blood. But hours later, she wakes up in a clearing just outside her tiny Idaho hometown—alone, unhurt, and with all evidence of the horrifying crime erased.

Across the valley, Noah just wants to be like everyone else. But he’s not. Nightmares of murder and death plague him, though he does his best to hide the signs. But when the world around him begins to spiral toward panic and destruction, Noah discovers that people have been lying to him his whole life. Everything changes in an eye blink.

For the planet has a bigger problem. The Anvil, an enormous asteroid threatening all life on Earth, leaves little room for two troubled teens. Yet on her sixteenth birthday, as she cowers in her bedroom, hoping not to die for the fifth time, Min has had enough. She vows to discover what is happening in Fire Lake and uncovers a lifetime of lies: a vast conspiracy involving the sixty-four students of her sophomore class, one that may be even more sinister than the murders.

Noah Livingston knows he is destined to survive.

The 64 members of Fire Lake’s sophomore class are trapped in a place where morals have no meaning, and zero rules apply. But Noah’s deaths have trained him–hardened him–to lead the strongest into the future . . . whatever that may be. And at any cost.

Trapped in a violent world where brute force passes for leadership, it’s tempting to lay back and let everyone else fight it out. But Min’s instincts rebel against allowing others to decide who lives and who dies. She’s ready to fight for what she believes in. And against whomever might stand in her way.

Brendan Reichs was born and raised in Charlotte, North Carolina. He graduated from Wake Forest University in 2000 and The George Washington University School of Law in 2006. After three long years working as a litigation attorney, he abandoned the trade to write full time. He lives in Charlotte with his wife, son, daughter, and a herd of animals that tear up everything.

Thank you so much to Penguin Teen for hosting this blog tour and sending me an ARC of Genesis to review! Don’t forget to check out the other stops on the tour, and let the spoiler-y bits begin!

My Thoughts on Genesis (#2)

Y’all need to get to reading book 2 quicker because things are so wild in this book and I need people to chat about it with, okay?

If you thought book one was a rollercoaster, wait until you dive in to Genesis.

As a refresher, at the end of book 1, Noah has gone to the dark side (dun dun dun!!!) and he’s working through Phase 2 by killing people (I.E. THAT GIRL YOU LIKE, MIN??? HOW DO YOU EXPLAIN THAT BETRAYAL, MAN?).

Min’s been trying to survive this newly ruthless world as best she can, but her instincts rebel against letting others choose who lives and who dies. New secrets are revealed–game changing ones, I might add, that make Min, Noah, and the whole sophomore class of Fire Lake question what they thought they know.

*screams into a pillow for 10 minutes*

I’m in such a frenzy after this book and it’s just been such an awesome rollercoaster ride and now I can’t believe it’s over. And that we have to wait till Spring 2019 for book 3.

Genesis lived up to all of my expectations and even though I gave it the same rating as book 1, it was so much better.

The action is more action-y than ever, the situation is more ruthless, and the secrets that come out are just hitting us by the dozen. It’s like how Catching Fire was better and more intense than The Hunger Games–but this time with a plot that’s actually different than the first book.

I really enjoyed how much Min changed in this book. In the last book, I wasn’t too keen on her because she felt too perfect, but now she’s going through all these changes because of the situation that was the sort of growth and flaws that I was looking for in the first book. She’s stepping up to the plate and making mistakes along the way and I ended up liking Min the best in this book, which was a pleasant surprise!

Noah’s as tormented as you could imagine (seriously, he has these parts italicized that are kind of like a psychopathic voice in his head. ~spooky~). I did like how he worked towards redeeming himself in this book, and his start to his character change back to being good was enjoyable to see.

Which, because we’re getting a book 3, is actually kind of a silly complaint because we’re almost certainly going to see this happen in the next book, but I’m grasping at straws here, okay? Give a reviewer a break and let me try to find something wrong with this. (Operative word: try.)

There were so many little details in this that made it so much better than the first, like that one sly lesbian couple Reichs slipped in (YASS) and also just Tack in general (my poor baby).

The plot was just so engrossing. I sped through this entire book very quickly and it’s honestyl really sad how fast it went because now I wish I savored it more. Oh well, I guess it’s just time for a reread.

But the mystery aspect was executed really well, and if you thought the reveals in Nemesis were all Reichs has up his sleeve, well, let me just inform you that you are very, very wrong.

Genesis was such an amazing read and totally knocked book 1 out of the ballpark. If you’re a sci-fi fan like me, or anyone who just loves action or conspiracy stories, I totally recommend you jump on the Nemesis train. (I’m begging you please do it; I need someone to scream with me about that cliffhanger 😭.)

Have you read Nemesis yet? If not, WHY HAVEN’T YOU DONE SO WHERE HAVE YOU BEEN?