Today’s post is a cover geek, review, and spotlight all wrapped in one! I’m featuring one of my favorite YA debuts of 2017, which is The Wicked Deep by Shea Ernshaw!

The Wicked Deep revolves around the cursed town of Sparrow where three sisters were sentenced to death for witchery two centuries ago. For a brief time each summer, the sisters reappear and exact their revenge by stealing the bodies of girls and using them to lure boys to drown in the harbor.

Seventeen-year-old Penny Talbot has accepted the fate of the town, but the arrival of a stranger, Bo Carter, on the eve of the sisters’ return, leads to putting both Penny and Bo in danger. The murders of boys leads to the townspeople turning against one another and suspicions to rise. Yet, Penny has the ability to see what others can’t and she’ll be forced to make the decision between saving Bo and saving herself.

I adored reading this novel. The Wicked Deep is one of those really atmospheric novels that sucks you into the setting and never spits you back out.

Despite all of the cursed town of Sparrow’s faults (like…being cursed), I fell in love with just how vividly rich the setting was. It felt like I was there in Sparrow, taking in the ocean as it crashed on the shore of the lighthouse, the drowned bodies floating to shore, and the witch hunts around town (oops, that got morbid really quickly).

But joking aside, Ernshaw is an awesome writer. She managed to develop this town and setting without tedious amounts of exposition or purple prose, creating the atmosphere not only through what she told us, but also with her tone and other aspects of the writing.

Besides the dark, bewitching setting (just think of all the amazing aesthetics out there), the plot was equally as good. To me, it felt like one of those morbid fairytales–sisters coming back to haunt a town and killing people out of revenge each year but life-long resident Penny and newcomer Bo might just save the day!

It’s nothing so literal nor comic, but the entire novel had a fairytale-esque feeling, making it seem even more haunting and magical.

I liked how the plot delved almost into a mystery–trying to figure out who the sisters were possessing–while also remaining a spooky contemporary with other subplots running around.

I liked the characters, and although they do pull some surprises on you a couple of times, I enjoyed reading about them. I didn’t particularly connect with any of the main characters because of some…other forces at hand, but I was still very much invested in what was going to happen to them (aka I would care if anyone died).

I’m somewhat apathetic to the romance–a lot of it felt like insta-love and although it’s not a bad thing a lot of the time, I just didn’t care too much about what was going on between Penny and Bo and was more involved with the plot about the sisters. That was what I was hooked on–the curse on Sparrow and what was going to happen to the town.

I do think the romance was used very skillfully, but I just personally had no opinion on it. It worked well as a plot device and I think it was the best option for Ernshaw to use, because the only other way to get around insta-love was to drag out the story unnecessarily, something that would have had a greater negative impact than insta-love.

Insta-love is something that’s not technically bad, and a lot of the times it is used when the romance isn’t the main focus of the novel. I dislike insta-love in romance novels (if I’m going to read a romance, I want a real romance), but in other non-romance genres, I don’t mind seeing quicker romances.

I was going to drop my rating because of the insta-love between Penny and Bo, but the ending of the novel really made up for it. I can’t spoil anything for you, but the execution of the ending plus the plot twists brought my rating back up.

I did find that the plot twist were kind of predictable–I had an inkling of what was going to happen–but that doesn’t mean I wasn’t #shook after reading the sly way Ernshaw revealed the twist to us.

This takes me back to the pacing. I really enjoyed how the story was paced; this is a medium length book (~320 pages) and I think Ernshaw did a great job of telling the story in a way that didn’t drag it out nor rush any parts. I never felt like I wanted to stop reading, and although the pacing is a tad slower than an average fantasy, I don’t think it’s a negative aspect of the novel. It also sped up near the climax which was really enjoyable to read because I nearly rushed through the end of the novel, flipping pages (well, pressing my Nook buttons), as fast as I could read.

Overall, I really enjoyed reading The Wicked Deep by Shea Ernshaw. Something in the novel just pulled me in, whether it was a combination of the setting and plot or just the witch-y, Salem atmosphere that’s not as common in young adult novels. If you’re a fan of Hocus Pocus, Halloween Town (just less comic), or the Salem Witch Trials, I would definitely recommend The Wicked Deep, as well as if you’re looking for a darker fairytale-like story or a fantastical mystery.

So, I have a very special Cover Geek Planned for next week, and it just so happens I learned something new a couple of days ago that made next week’s post pertinent to this week’s post, which is why I’m going to spoil Cover Geek #16 for y’all!

Lisa Perrin is one of my favorite illustrators of YA covers. You might have seen her work on the covers of Wink Poppy Midnight, Wicked Like a Wildfire, Fierce Like a Firestorm, and most recently, The Wicked Deep.

Her illustrations are just so beautiful, and today I just wanted to highlight the masterpiece that is The Wicked Deep‘s cover.

The illustrations, although different from Perrin’s style on the other three covers as it’s monochromatic, are just as beautiful and do a fantastic job of showing the haunting, magical aspect of the novel with the crow and the moon and the trees and–wow.

If you haven’t seen photos of the physical ARC, the cover isn’t just beautifully composed–it also has some awesome silver iridescent foil that shines a rainbow of colors when turned in the light.

AHHH. And this isn’t even covering (haha, see what I did there?) the beautiful UK edition of the novel. 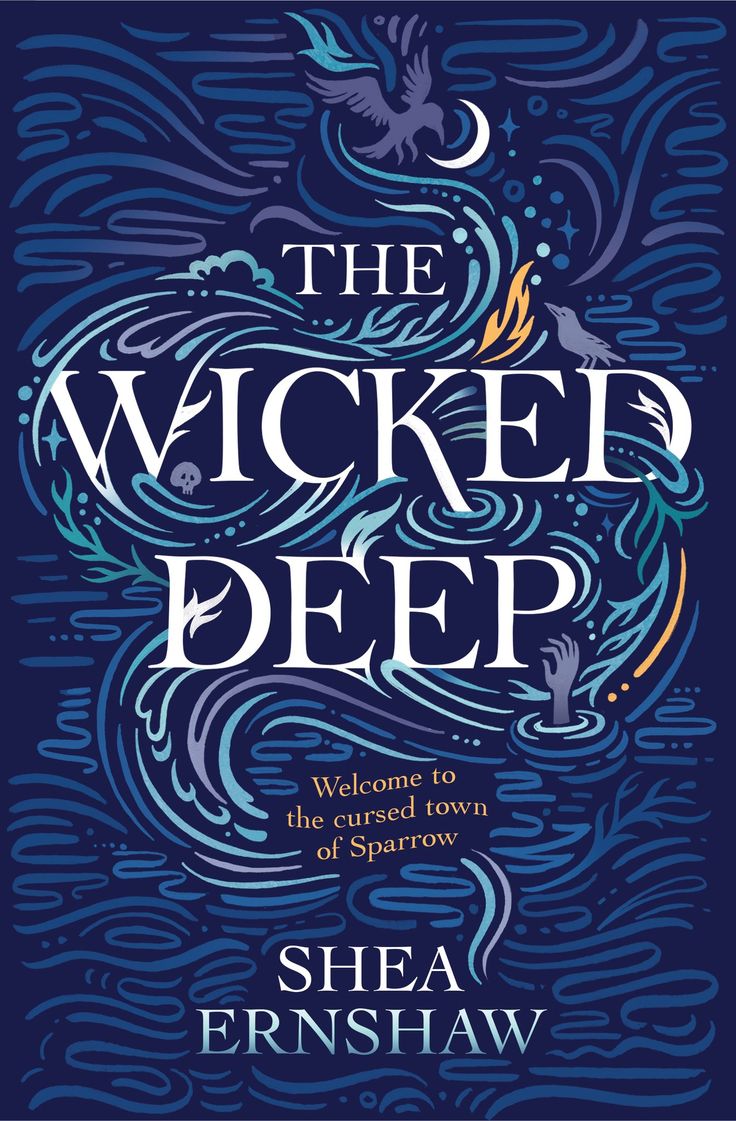 This definitely has a less “haunted in the woods vibe” and more of a “drowned in the ocean” vibe, both of which seem very accurate to me. I really like the natural flow of this cover, how the swirls draw your eyes to the different object and how different shades & complementary colors help make this cover pop.

Both covers are just so *Taylor Swift voice* gorgeous! I absolutely love them both.

But the real moral of the Cover Geek is that I’ll be cashing out both dollars and pounds to get my hands on both of these beautiful covers, regardless of the insides (but the inside of the novel is awesome too, just sayin’.)

Find out which The Wicked Deep character you are by taking this fun quiz!

More Info on the Book

Hocus Pocus and Practical Magic meets the Salem Witch trials in this haunting story about three sisters on a quest for revenge—and how love may be the only thing powerful enough to stop them.

Welcome to the cursed town of Sparrow…

Where, two centuries ago, three sisters were sentenced to death for witchery. Stones were tied to their ankles and they were drowned in the deep waters surrounding the town.

Now, for a brief time each summer, the sisters return, stealing the bodies of three weak-hearted girls so that they may seek their revenge, luring boys into the harbor and pulling them under.

Like many locals, seventeen-year-old Penny Talbot has accepted the fate of the town. But this year, on the eve of the sisters’ return, a boy named Bo Carter arrives; unaware of the danger he has just stumbled into.

Mistrust and lies spread quickly through the salty, rain-soaked streets. The townspeople turn against one another. Penny and Bo suspect each other of hiding secrets. And death comes swiftly to those who cannot resist the call of the sisters.

But only Penny sees what others cannot. And she will be forced to choose: save Bo, or save herself.

Eeeeee! Today marks 3 months until #THEWICKEDDEEP pubs!!!! 😱 WOOT! To celebrate, I’m SO excited to share 1 of 3 spooky book teasers!
The others will be revealed soon!
🌊🕸🌙✨🌚🔮🦉🖤🥀🕯⚰️🦇 @RivetedLit @simonteen @SimonTeenCA pic.twitter.com/vOWl2h9hxF

More Info on the Author

Shea Ernshaw is an Oregon native and YA author. She often writes late, late, late into the night, enjoys dark woods, scary stories and moonlight on lakes. She drinks loads of tea and believes sunrises are where unicorns hide.

She lives with her two cats, a dog, a husband, and a stack of books beside her bed she still needs to read.

Her debut THE WICKED DEEP will be published by Simon & Schuster/Simon Pulse in 2018.

I hope you’re as excited for the release of The Wicked Deep as much as I am! What do you think of the summary?

Thank you to Simon & Schuster & Edelweiss for providing me with a digital review copy in exchange for an honest review!

9 thoughts on “Spotlight: The Wicked Deep by Shea Ernshaw (DRC)”