October is almost halfway through, and after multiple stops by the library, three different bookstores, and Goodreads, I thought I’d suggest some witchy books to get you in the Halloween (or autumnal) spirit!

Without further ado, here are some books to add to your already hulking TBR!

(P.S. for some reason, the content I wrote for this blog post didn’t save which is why I had to rewrite & repost it after the half-finished version posted on Thursday!)

Even the Darkest Stars by Heather Fawcett

Even the Darkest Stars is such an intriguing novel. Set on the border of a kingdom lined by icy, treacherous mountains, this novel has a rich setting and magical elements. Our protagonist Kazmin yearns to follow in her mother’s footsteps and climb the icy mountains, but it’s a dangerous task. The mountains encroach on witch territory, but when the Royal Explorer comes by, he gives her the chance of a lifetime to go with him up the mountains.

Kazmin soon discovers that not everything is what it seems and the safety of her empire might not be true, as well as the young Royal Explorer’s real identity. Filled with treacherous peaks, witches, and the yearning of youth, Even the Darkest Stars is sure to be a witchy read that will put you right on track for winter!

I definitely liked reading this novel, the cliffhanger at the end will leave you yearning for more if the rich, vivid world isn’t enough to hook you from the start!

The Crucible by Arthur Miller

A classic, The Crucible by Arthur Miller tells the story of the Salem Witch Trials. Following the actions of a group of young girls, led by the notorious Abigail, this play is a haunting retelling of the events that killed many in the 17th century. Not just a silly love story, the Salem Witch Trials showed the gap between the wealthy widows and the poorer young females in colonial Massachusetts.

I originally read this novel for school, but I felt like it deserved a spot on this list not only for just being a good book, but also for bringing all that classic witchiness in. This book can be very chilling at time (voodoo dolls, anyone?) and should be one of the novels every person reads.

Although I may have despised this novel when I had to read it for school, I grew a fondness aided by absence (absence makes the heart grow fonder) towards the storyline. It’s quite the classic and I love reading about Salem. 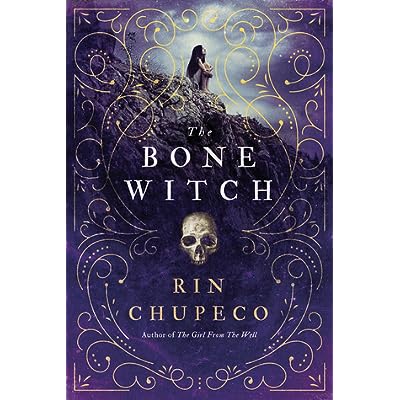 The Bone Witch by Rin Chupeco

The Bone Witch by Rin Chupeco is a unique novel about a girl who reveals her powers as a dark asha, also known as a bone witch. She has the ability to raise the dead, and after accidentally raising her brother, she is willingly taken from her homeland to train as an asha.

During her apprenticeship, our protagonist Tea learns about the danger her friends, family, and home is in from the monsters that regularly rebirth and haunt people. This is only the start of her journey as a bone witch, but its one sure to chill you as the dead is raised from their graves.

I finished this novel a few weeks ago and it’s probably the least chilling and most gruesome (although nothing’s really gory or anything) of the books. There’s a huge revenge factor and I’m on such a cliffhanger waiting for the next book!

Wicked Like a Wildfire by Lana Popovic is a vividly rich novel about a pair of twins who have magical powers running through the females in their family. Iris has the ability to turn flowers into beautiful glass masterpieces while her sister Malina can turn a person’s emotions into song.

When the girls’ mother is murdered but not dead, these two witches begin to discover startling truths about themselves, their mother, and their family which may change the course of their lives.

For those of you fond of something a little more poetic, Wicked Like a Wildfire is just the book for you! There is a ton of description and vivid imagery that will make you swoon with each line. I’m in the middle of reading this and although it’s a little slow at the beginning, it’s definitely worth a try if this seems like something you’d like!

And lastly, here’s one you might want to add either to your TBR or your Edelweiss requests!

The Wicked Deep by Shea Ernshaw

The Wicked Deep is another Salem-esque novel about three sisters who were killed two centuries ago on the accusation of witchcraft and now are on the hunt for revenge, and love might be the only thing able to stop them. They return for a short time to fulfill their desire for vengeance by taking over the bodies of three girls and luring boys into the harbor and pulling them under.

Penny Talbot, a local town girl, has accepted the town’s fate like many others. But when a boy named Bo Carter arrives, he stumbles into a web of danger, lies, and deceit. She’ll end up having to make the decision of a lifetime: save Bo, or save herself.

The atmosphere in this novel is positively lovely! I’m not that far into it, but I am definitely enjoying it so far. (Have I mentioned I love Salem-esque novels? Yes? Okay.)

Have you read any of these titles? Which ones are your favorites?